In The Spotlight - Denise Mina 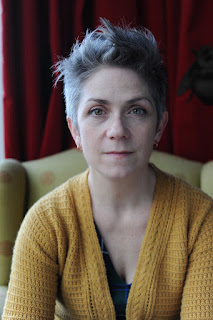 Introduction:-
Denise Mina is the author of 14 novels which includes 3 different series the Garnethill Trilogy, the Paddy Meehan series and the Alex Morrow series along with 3 standalone novels.  The most recent being Conviction.  The first book in the Garnethill trilogy won the John Creasey Dagger from the CWA for Best Crime novel in 1998.  In 2011 The End of the Wasp Season won the Martin Beck Award. Whilst in 2012 and 2013 the novels The End of the Wasp Season and Gods and Beasts won the Theakston’s Old Peculier Crime. Novel of the Year Award. In 2017 The Long Drop won the Gordon Burn Prize and the Mcllvanney Prize for Scottish Crime Novel of the Year.  The first Paddy Meehan novel, The Field of Blood, was filmed by the BBC and broadcast in 2011 whilst the second book The Dead Hour was broadcast in 2013.  She is also the author of two different graphic novels Hellblazer and the Millennium Trilogy and two plays Ida Tamson (2006) and A Drunk Man Looks at the Thistle (2007) and a radio play The Meek which was performed on BBC3 in 2009

Favourite book?
Heart of a Dog by Mikhail Bulgakov

Which two characters would you invite to dinner and why?
Tom Ripley and a smug uberman, someone like James Bond. I know I’d get killed in the cross fire but it would be a great fight to watch.

How do you relax?
I can’t remember. Watch box sets? Is this what the young are doing now?

What book do you wish you had written and why?
Not a book but ‘The Still Beating Heart’by Edgar Allan Poe

What would you say to your younger self if you were just starting out as a writer?
Remember to enjoy your triumphs. It’s so easy just to move onto the next worry. Also, in the future everyone will be precariously self-employed so what you’re doing isn’t as foolish as you think.

How would you describe your series character?
Well, I haven’t really got one at the moment but Anna McDonald is rude, impatient and a better friend than most of us deserve. 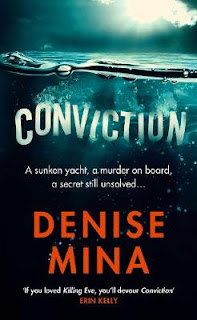 Conviction by Denise Mina (Published by Vintage Publishing, May 2019)
Conviction stars a strong female protagonist who is obsessed by true-crime podcasts and decides, one day, to investigate one of the unsolved crimes herself. It's just a normal morning for Anna McDonald. Gym kits, packed lunches, getting everyone up and ready. Until she opens the front door to her best friend, Estelle. Anna turns to see her own husband at the top of the stairs, suitcase in hand. They're leaving together and they're taking Anna's two daughters with them. Left alone in the big, dark house, Anna can't think, she can't take it in. With her safe, predictable world shattered, she distracts herself with a story: a true-crime podcast. There's a sunken yacht in the Mediterranean, multiple murders and a hint of power and corruption. Then Anna realises she knew one of the victims in another life. She is convinced she knows what happened. Her past, so carefully hidden until now, will no longer stay silent. This is a murder she can't ignore, and she throws herself into investigating the case. But little does she know, her past and present lives are about to collide, sending everything she has worked so hard to achieve into freefall.
Posted by Ayo Onatade at 06:00