Talking to the Nanny 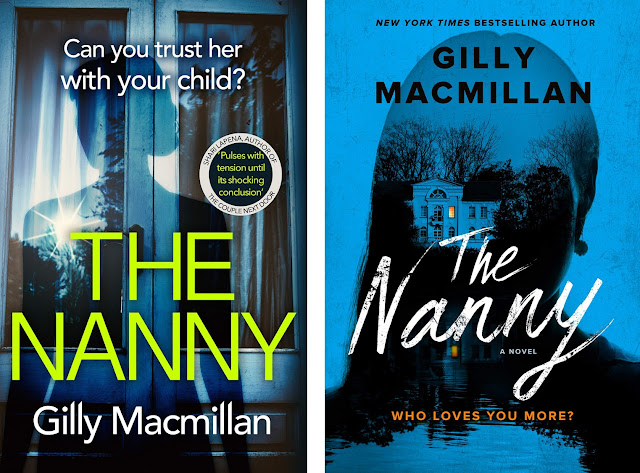 We were enthused by an upcoming thriller, one that is a slippery narrative, a lucid dream of a novel - the latest from Gilly Macmillan and entitled THE NANNY, recently reviewed at Shots

It’s the characters and locations that make this dark novel so slippery and claustrophobic that the reader is compelled to read beyond the melodrama and enter into a nightmare world. This novel is set in a world of privilege and one of loss, where the dangers lurk in recollection, and hidden motives.

The intriguing premise belays a darker world from the one that little Jocelyn first experienced as a child - her first experience of loss. She was seven when Hannah Burgess, her nanny vanished from Lake Hall, the estate of Lord and Lady Holt. All traces of Hannah’s existence vanished with her, leaving only a mystery and a memory – neither which should be trusted.

As a psychological thriller, The Nanny is troubling, and the perfect read to pack for the summer. It provides distraction from the reality that surrounds us, again indicating that taking perceptions and recollections at face-value can be dangerous, so very deadly. Sometimes the truth requires uncovering, but what we find may well unsettle.

However, it is currently on offer at Amazon as an eBook for 99p, and also as an audiobook from Audible.co.uk for £19.24 or for a monthly credit in their membership platform.

Gilly kindly took time to answer some questions about her work for Shots Readers as to what THE NANNY has in store.

Ali K   So tell us did The Nanny, in terms of narrative come from an idea that you “ran with” or had you plotted heavily before commencing telling the story?

Gilly M           I aspire to be a writer who plans, but my mind fills with grey mist when I try to. My usual method of working, which as how I wrote The Nanny, is to start with a premise I believe is exciting, and ideas for strong characters, and then run with it. It’s somewhat terrifying working in that way but I believe I get my best ideas when I’m in the thick of writing, so it works for me. The downside is that it can lead to significant edits at second draft stage.

AK      And I assume your own experience of both sides of the Atlantic gave Jocelyn her background?

GM      Absolutely. My family moved to Northern California when I was a teenager and the culture shock was tremendous and wonderful. I thought it was important to give Jocelyn, or Jo as she prefers to be called once she’s left home, a glimpse of life far from the influence of her parents.

AK      The Nanny has a fiendish plot, so tell us a little about the writing process?

GM      As I said above, I start with a concept and strong characters and then run with the idea. It makes the process nerve wracking, but I believe that benefits both my writing and plotting. At no point can I relax and just type out a scene according to a pre-existing plan. I know that is a very successful method for many brilliant writers, but it doesn’t suit me. What I like about how I work is that I am constantly inventing, and I believe I get my best ideas as I’m writing, and this process allows me to run with those ideas, adding twists as I go, and letting characters develop.

AK      And could you tell us why BURNT PAPER SKY was retitled WHAT SHE KNEW? 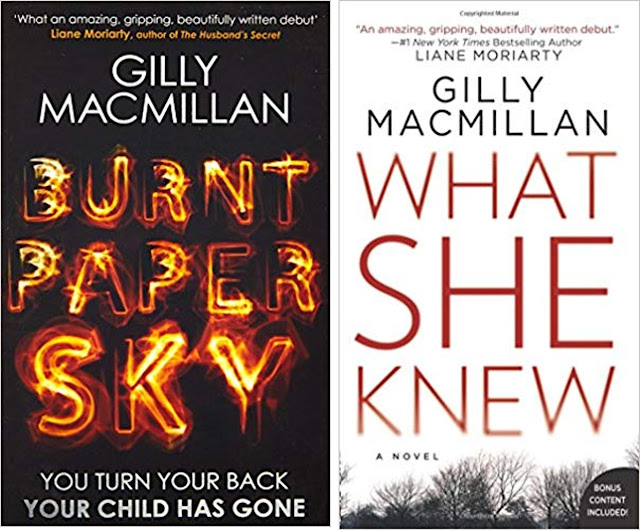 GM      WHAT SHE KNEW is the title that the book had in the US market from the outset. They felt that BURNT PAPER SKY wouldn’t work for them and came up with a new title and a very successful package. Sometime later my UK publisher decided to adopt it here, too.

AK      What is it that intrigues you about family and dysfunction that is evident in your writing, especially in your latest, THE NANNY

GM      Family is something that we all have, in some way, shape or form, and I’m interested in exploring common experiences. Family friction is inevitable, though hopefully not often to the dysfunctional extent that a thriller plot requires, and how we deal with that speaks to both our weaknesses and strengths as people. It intrigues me. I guess you could say my starting point is the famous line from Philip Larkin (“They f*** you up, your mum and dad”), though I love exploring how family relationships mould us for both good and bad. Ultimately it comes back to a nature/nuture question.
AK      So did you come from a Bookish family?

GM      Yes! My mum was an English teacher and has always been an avid reader of fiction and my dad read tons of non-fiction. Our house was full of books and we visited the library regularly. Bookshops were a very special treat. For as long as I can remember I’ve made time to read every day.

AK      And the novels you read, that perhaps made you consider entering the precarious world of creative writing?

GM      Absolutely. Though writing wasn’t something I considered doing seriously until late in life and I am self-taught. I didn’t have the money or opportunity to take a creative writing course, so I figured it out by rereading and analysing books I admired. I made a lot of mistakes along the way as a result, but I think it’s important that people know you can become a writer without taking a course.

AK      Your work is very popular in America, so what is it about your novels that you consider appeals to the US Reader?

GM      That’s a very good question and one that my US editor and I have discussed in the past, though we haven’t come up with any definite answers. I will say that I had both the UK and North American markets in mind when I began writing, because I have always been a huge fan of fiction from across the pond. Maybe it helped that my family lived in California for a few years when I was a teenager, though that was a long time ago! Our best guess was that the writing style and strong character focus has a broad appeal. THE NANNY is probably my most ‘British’ book, so it’ll be interesting to see what reception it gets in North America. 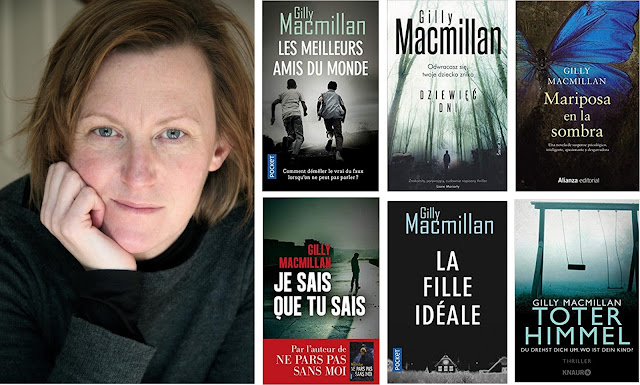 AK      And why do we appear to enjoy examining the lives of others, the ones with dysfunction such as work by Alafair Burke, Patricia Highsmith, Gillian Flynn, Laura Lippman to name authors who have much in common to your own style?

GM      I believe we’re all inherently nosy! It’s part of the human condition. We love to know about other people’s lives and are hungry for gossipy details. Fiction can give us insight into the lives of others like nothing else. We can live in the mind of another person, witness the intimate details of their lives and thought processes and this is particularly interesting when dysfunction comes into play. These stories thrill and fascinate us without putting us in actual danger and let us question how we might react if we were in the shoes of the characters. What’s not to love?!

GM      I love so many writers! James Lee Burke was a big influence on me when I was starting out. I love how his books combine thrilling plots, intense characterisation, locations that come alive off the page and writing that can be poetic at times. I recently discovered a literary crime novel by Polish writer Olga Tokarczuk called Drive Your Plow Over the Bones of the Dead. It was shortlisted for the International Man Booker prize. I loved it. The main character is stunning, and the writing is stunning. I can’t stop thinking about it. Other crime writers I love to read include Mary Kubica, Rene Denfeld, Shari Lapena, Linwood Barclay.

AK      And finally, what are you working on currently?

GM      It’s early days, but I’m working on a novel that could be described as a journey into psychological horror. It’s narrated by a writer, so it’s very fun to write, though also creepy. I might soon be sleeping with my eyes open.

Shots Magazine pass out thanks to Katie Sheldrake of PenguinRandomHouse for kindly organising this interview.

More information about the work of Gilly MacMillan > https://www.gillymacmillan.com/

And a reminder, THE NANNY is on offer at Amazon as an eBook for 99p, and also as an audiobook from Audible.co.uk for £19.24 or for a monthly credit in their membership platform. 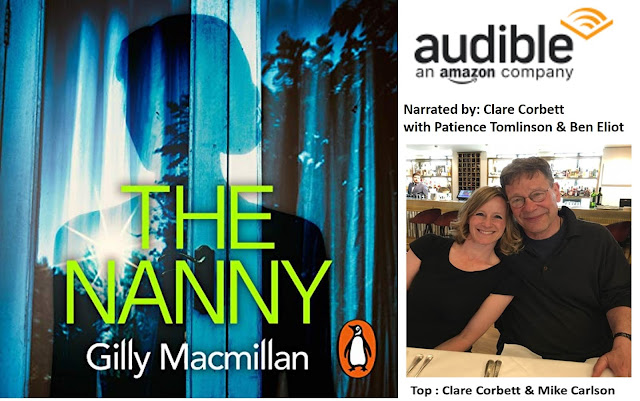