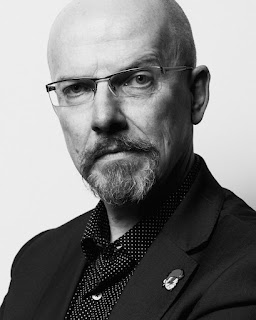 D V Bishop is the author of the Cesare Aldo series set in Florence. The first book in the series City of Vengeance was shortlisted for the Wilbur Smith Adventure Writing Prize. City of Vengeance has also been longlisted for both the CWA Gold Dagger and Historical Dagger

My latest novel is The Darkest Sin, the second of my Cesare Aldo series set in Renaissance Florence. When a naked man’s corpse is found deep inside a convent, bathed with blood and stabbed 27 times, Aldo battles Church politics and a campaign to silence the woman of Santa Maria Magdalena. Could one of the nuns be the killer and, if so, why?

What an impossible question! Ask again tomorrow and my answer would be different. But, for now, I’ll say The World According to Garp by John Irving. It’s a writer’s book about being a writer, but it is also prescient in discussing issues of gender and sexuality. Bonus points: it’s funny, too.

I love Colin Dexter’s Inspector Morse but suspect he would make a dreadful dinner guest. Instead, I’m inviting comics character Devlin Waugh, who’s a gay vampire and freelance exorcist for the 22nd Century Vatican – and Vivian Sternwood from The Big Sleep. A camp vamp and a femme fatale, that should make the evening go with a swing!

I am developing an expensive vinyl LPs habit. If I’m home on Sunday I’ll put on a record before lunch and read for an hour.

The Collector Collector by Tibor Fischer is so inventive and irreverent. It is narrated by a 3000-year-old plate, and is funny, thoughtful, wry and moving. I could never imagine such a novel, let alone pull it off.

What would you say to your younger self if you were just starting out as an author?

Be patient; writing is a marathon, not a sprint – especially novel writing. Tell the stories you’d want to find in a bookshop and never stop reading.

I was a series reader first, so was always going to write series fiction. It’s like being in a long-term relationship, you slowly discover more about your characters over time. They grow and evolve yet still surprise you. Plus writing a series means you can build on what is already there, rather than having to start from scratch all over again with each new novel.

I certainly would consider writing a standalone novel, even if it might seem like having a one-night stand with some saucy new characters that caught my eye. My worry is I’d fall in love with those new characters and want to bring them back for another story, and another. Then I’m writing two series at once! But Ann Cleeves does that wonderfully well with Vera and her Matthew Venn novels, so never say never.

What are you looking forward to at Lyme Crime?

New Blood panels are always a great place to discover fresh voices, and this year’s festival has three crackers being interviewed by Jack Jordan. I’ve already got the first two novels by Tariq Ashkanani on my Everest-like TBR pile, but I’ve yet to encounter Sarah Bonner and Sarah Pearse so am eager to hear them speak.

I’ve never been to Lyme Regis before, but studied The French Lieutenant’s Woman at school and loved it when Inspector Morse visited the area in The Way Through the Woods. I’m hoping to get out on the cob and channel my inner Meryl Streep.

Florence. Spring, 1537. When Cesare Aldo investigates a report of intruders at a convent in the Renaissance city's northern quarter, he enters a community divided by bitter rivalries and harbouring dark secrets. His case becomes far more complicated when a man's body is found deep inside the convent, stabbed more than two dozen times. Unthinkable as it seems, all the evidence suggests one of the nuns must be the killer. Meanwhile, Constable Carlo Strocchi finds human remains pulled from the Arno that belong to an officer of the law missing since winter. The dead man had many enemies, but who would dare kill an official of the city's most feared criminal court? As Aldo and Strocchi close in on the truth, identifying the killers will prove more treacherous than either of them could ever have imagined...

More information about D V Bishop can be found on his website.

You can buy tickets for Lyme Crime here:- https://www.lymecrime.co.uk/tickets--contact.html