CRIMEFEST, one of Europe’s leading crime writing conventions, has announced the winners of its annual awards.

Now in its 15th year, the awards honour the best crime books released in 2021 in the UK.

The genre is the most popular in the UK. Nielsen BookData’s Books & Consumers survey data shows crime fiction sales in the UK across all formats stood at 54m in 2021; a 7% rise on pre-pandemic levels.

Named by the New York Time as one of “the most critically acclaimed young novelists working now,”Winter Counts was called a “once-in-a-generation thriller” by the Los Angeles Times. Weiden is the first Native American author to win an Anthony Award and the Thriller Award. Set on the Rosebud Indian Reservation, Winter Counts is an examination of the broken criminal justice system on reservations, and a meditation on Native identity.

A further £1,000 prize is awarded to Richard Osman and actor Lesley Manville, reader of Osman’s The Man Who Died Twice. It’s the second year the pair has scooped the Audible Sounds of Crime Award, sponsored by Audible and voted by Audible UK listeners, after winning in 2021 for his phenomenal debut smash-hit, The Thursday Murder Club.

The eDunnit Award for the best e-book goes to Abigail Dean for Girl A. Born in Manchester, and a former bookseller for Waterstones, Dean now works as a lawyer for Google. Her astonishing debut novel about siblings who flee abusive parents received widespread acclaim as a story of redemption, horror and love. It was a Sunday Times and New York Times global best seller.

Winner of the H.R.F Keating Award for best biographical or critical book on crime fiction is Patricia Highsmith: Her Diaries and Notebooks, edited by Anna von Planta, which was published for the centenary of Highsmith’s birth in 2021. It was praised by the New York Times as offering “the most complete picture ever published” of the canonical author.

Best Crime Novel for Children, aged 8-12, goes to M.G. Leonard’s birdwatching detective, Twitch. The internationally bestselling author tells a mystery adventure about friendship, bravery and birds, and Twitch is a celebration of the natural world.

Best Crime Novel for Young Adults, aged 12-16, is awarded to

Angeline Boulley for Firekeeper’s Daughter. The novel was praised by the Guardian as, “an interrogation of racist misogyny and a swift-paced, compelling thriller.”

This year also sees the introduction of the Thalia Proctor Memorial Award for Best Adapted TV Crime Drama. The award is named in honour of Thalia, a CrimeFest team member and a much-loved figure in the world of crime fiction, and who sadly died earlier this year.

The award is decided entirely by public vote from a longlist of the 43 TV programmes broadcast on British TV in the last year, based on a crime book. Ann Cleeves won the inaugural gong for Shetland, beating a strong shortlist that featured Antony Horowitz for Alex Rider, M.C. Beaton for Agatha Raisin and James Runcie for Grantchester.

Adrian Muller, Co-host of CRIMEFEST, said: The crime genre has dominated the book charts and our TV screens, keeping many of us company, particularly in the last two challenging years. The genre never fails to offer escapism and entertainment, as well as often exploring big issues and emotions. As a genre that also often makes sense of a chaotic world, it’s helped many people and is something we need today more than ever. We’re proud to celebrate the best the genre offers.”

CRIMEFEST had to postpone its 2020 and 2021 conventions, due to Covid restrictions. Hosted in Bristol, it is one of the biggest crime fiction events in Europe, and one of the most popular dates in the international crime fiction calendar, with circa 60 panel events and 150 authors over four days.

Leading British crime fiction reviewers and reviewers of fiction for children and young adults, alongside the members of the School Library Association (SLA) form the CRIMEFEST judging panels, aside from Audible Sounds of Crime Award in which Audible listeners establish the shortlist and the winning title.

Co-host of CRIMEFEST, Donna Moore, added: “We are proud to be one of the few genre awards that recognise e-books and audiobooks, humour, children and Young Adult crime fiction novels. We aim to be the most inclusive of awards to reflect the values of our convention, and the incredible diversity and reach of the genre which dominates the cultural landscape.”

CRIMEFEST was created following the hugely successful one-off visit to Bristol in 2006 of the American Left Coast Crime convention. It was established in 2008. It follows the egalitarian format of most US conventions, making it open to all commercially published authors and readers alike. 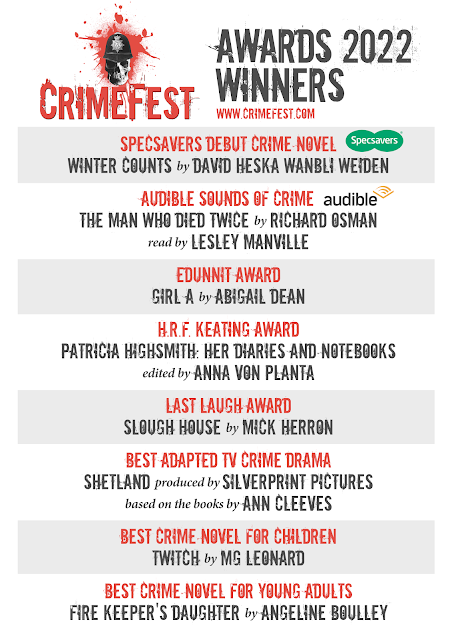 Girl A by Abigail Dean, (HarperCollins)

Shetland (season 6), based on the books by Ann Cleeves. Produced by Silverprint Pictures, part of ITV Studios; shown on BBC1.