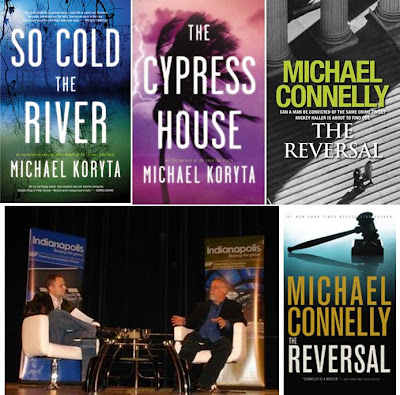 As preparations for Bouchercon San Francisco are away in earnest, I was delighted to learn more about MULHOLLAND BOOKS and their link to the UK’s Hodder and Stoughton publishing. The weird thing is that I’ve known Little Brown America’s Miriam Parker for sometime now, and she has kindly kept me abreast with this new imprint.

They have an eclectic range of authors some of whom will be present at the Mulholland Books Cocktail Party in San Francisco next week. The confirmed Mulholland authors are Mark Billingham, Marcia Clark, Sebastian Rotella, Duane Swierczynski and Daniel Woodrell. Incidentally Mulholland Books have an excellent blog which features guest posts from many crime / thriller writers [not all from the imprint] – Click Here to view this interesting resource.

I was also delighted to learn of US PI writer Michael Koryta who is published by Mulholland in the US being launched in the UK by Hodder and Stoughton with ‘So Cold The River’. Shots have a feature length interview coming online shortly. While Mulholland author Michael Connelly has The Reversal out in the US and in the UK from Orion Publishing next week.

Hodder & Stoughton is delighted to announce the launch of a new fiction imprint, MULHOLLAND BOOKS, whose titles will be published in partnership with the newly-launched imprint of the same name at Little, Brown US.The core of the new imprint will be suspense fiction, including crime novels, thrillers, police procedurals, spy stories and supernatural suspense. Mulholland Books will bring the most exciting new American thriller writers to a UK and international audience, as well as seeking out a select number of British crime authors who will also deliver what thrill-hungry fans demand. Building on Hodder’s existing reputation for publishing entertaining, high quality fiction, Mulholland plans to develop a global online community of crime and thriller readers through online marketing and the use of social media, and to supply that community with regular publications of compelling, fast-paced, page-turning reads. The new imprint will be headed by Anne Clarke as editor, with Nick Sayers as publisher, Katie Hall as digital marketing executive, and Kerry Hood as publicity director. Mulholland Books will publish 8-12 hardbacks and 8-12 paperback original fiction titles a year, and whatever their form, the promise of a Mulholland book is that you'll read it leaning forward, hungry for the next word. With a focus on online community building, internet marketing and authentic connections between authors, readers and publisher, Mulholland Books will be at the centre of a web of suspense.

Mulholland Books will launch simultaneously from in the UK and US next spring, with LA prosecutor Marcia Clark’s gripping series debut GUILT BY ASSOCIATION, a fast-paced crime thriller by the lead prosecutor in the OJ Simpson trial.

Anne Clarke says “I’m thrilled to be involved in such an exciting project, and I think Marcia Clark has given us the perfect book with which to launch our list. Marcia is a talented writer who combines incredible pace and energy with extremely engaging characters, and I can’t wait to publish her book and get the new imprint off to a thundering start.”

Marcia Clark’s GUILT BY ASSOCIATION next May will be followed by a wealth of other fresh and suspense-filled Mulholland titles, starting with a high-concept action thriller in June from Marvel Comics author Duane Swierczynski. Crime and thriller fans: watch this space!”

MULHOLLAND BOOKS: You never know what’s coming around the curve.

For more information, including the imprint trailer, blog posts and information about the crime and thrillers http://www.mulhollandbooks.co.uk/ or find then on Facebook and Twitter @MulhollandUK