The Reality behind Roslund and Hellstrom 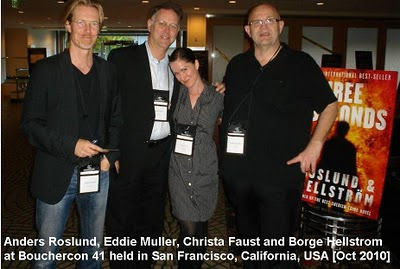 I had the recent pleasure of attending Bouchercon, the world Crime, Mystery & Thriller Convention held in San Francisco. Prior to my trip, I had the personal delight with my Shots Colleagues Mike Stotter and Ayo Onatade, to finally meet the Swedish writing duo Roslund and Hellstrom in London, at Quercus Publishing’s launch party for ‘Three Seconds’; during which I recorded a two part feature interview for The Rap Sheet -

Then in San Francisco, I moderated a panel with these two crime-writers, during which I discovered that the darkness that they write about, is matched equally by their charming personalities.

I have always believed in the statement by Irish statesman and philosopher Edmund Burke - “All that is necessary for the triumph of evil is for good men to do nothing" and I admire journalists who expose the true nature of evil, especially the dangers posed by the political extremes, be they threats to society from the far-right, or the extreme-left.

Anders Roslund like Stieg Larsson is one of those men, fearless in expressing and exposing the truths that lie beneath the evil of extremism, something that he revealed in our interview –

Ali Karim: So, I cannot help but ask this: What do you think of the Stieg Larsson global phenomenon?

Anders Roslund : For me he is not global; he is still local to me. This is because my contacts with Stieg Larsson were--and are--very important to me. I was for a long time publishing investigative journalism about extreme right-wing organizations. At one point I was on top of their “death list” and was physically abused, and was referred to as the “Threatened TV Man” in all the newspapers. I had a bodyguard. I was living in hotels without addresses, and as soon as my new number and address were known, I had to move fast to yet another “safe house.” Then the death threats returned. At that time, I contacted Stieg, since he had the same problem with the extreme right, and he had the knowledge and experience I needed to survive the Nazi threats. We shared the same problem, we worked it out together. I miss him immensely.

I am partway writing up my report about the wonderful time I had in Bouchercon, [with R J Ellory, my friend the award-winning thiller-writer], but with a deal with my wife; I have just returned from a week in France [for allowing to me to escape to the US West Coast for a few days]. During this time in Europe, I noticed another symptom of the economic crisis - the march of the extreme-right in that once bastion of truly liberal values – Sweden. I was pleased to see that Anders Rolsund commented on the situation last week in The Guardian –

So, it happens again. A town in flames. A nation changes complexion. A democracy looks for a new direction.

It started in 1991, August; a quiet Stockholm summer evening. The silence is shattered: a man is shot and wounded. For another six months the whole of Swedish society is wounded; fear becomes a part of all of us. One person dies, and others damaged for life. Slowly a pattern emerges: a Swedish citizen who shot with a rifle and laser sights at victims who all had something in common – darker skin, dark hair, or an immigrant background.

I was then the chief reporter for Swedish television on the story, which was the biggest police operation and trial that Sweden had seen since the 1986 assassination of the prime minister, Olof Palme. I reported from the first shots till the last day of the trial. I saw Sweden changed: Nazi flags were raised; there were riots between demonstrators and counter-demonstrators; young people found their way into extremist groups. And out of that time an anti-immigrant party emerged – called New Democracy – which a few months later gained a popular vote and entered Sweden's parliament.

As a journalist I continued to cover the growth of rightwing extremism and xenophobia in Sweden. Just like my fellow journalist and author Stieg Larsson, death threats were made against me, and I lived in hiding with armed bodyguards.

Then everything changed again. A few years later, democracy and openness had pushed back the fear of foreignness. We could once more be proud of our Sweden. Until now. Until it happened again – but this time the other way round.
This time the anti-immigrant party, the Sweden Democrats, were formed first. During the autumn's election campaign they ran on one issue only and in September were voted into the Swedish parliament. Xenophobia became established and – I am certain of this – legitimised what we see happening again, this time in Malmö, Sweden's third largest city, situated a long way south, close to the continent, and with a high proportion of immigrants, who, the police believe, are now being targeted by a racially motivated gunman. The latest attack was on an Iranian-born hairdresser on Saturday.

If you’ve not read Roslund and Hellstrom’s Three Seconds, you will find that their narrative is edged with the darkest edges of reality, and here are my thoughts –

Three Seconds ushers you into the grim, violent world of undercover police and the Polish mafia’s plan to corner the drug market in the prison systems of Sweden, Finland, and Norway. When a clandestine drug operation handled by undercover Swedish agent Piet Hoffmann goes wrong, and a Danish covert operative is murdered, Hoffmann’s handler, Erik Wilson, concocts a scheme that will place his agent in full view of the Polish mafia, to take control of the drug supply at a Swedish penal complex. Sniffing an irregularity in the investigation of the dead Danish agent are Roslund and Hellström’s series cops, Ewert Grens and Sven Sundqvist, who encounter barriers at every turn. Meanwhile, agent Hoffmann infiltrates a maximum-security penitentiary with the idea of assuming dominion there, using the drugs supply as leverage. However, the Polish mafia, in the guise of Wojtek Security, has other ideas.Tense and gripping, with a chilling climax, Three Seconds is not a book to miss if you like your crime fiction edged with the steel blades of reality. Roslund and Hellström pepper their narrative with insider knowledge and perspectives, and their story’s brutal violence pushes this new book firmly into the thriller category.

Sometimes the best fiction puts a mirror to reality, even if that reflection is not pleasant.

Email ThisBlogThis!Share to TwitterShare to FacebookShare to Pinterest
Labels: Roslund and Hellström