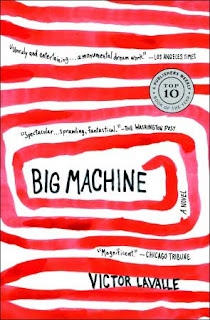 According to the Booktrade, independent publishers No Exit Press have snagged the 2010 American Award winner Victor LaValle.

UK and Commonwealth English language rights to 'Big Machine', the second novel by Victor LaValle a 38-year-old New York author, who has already drawn comparisons to Ralph Ellison, Chester Himes and Thomas Pynchon, were bought for an undisclosed sum by No Exit's Publishing Director Ion Mills from agent Abner Stein.

Winner of a coveted Shirley Jackson Award for Best Novel of 2009 as well as an American Book Award in 2010, Big Machine tells the story of Ricky Rice, an ex-junkie and survivor of a suicide cult whose life is changed by the arrival of a mysterious letter summoning him to enlist in a band of paranormal investigators comprised of former addicts and petty criminals, all of whom had at some point in their wasted lives heard what may have been the voice of God. The book wowed US critics from coast-to-coast and led influential political magazine, The Nation, to call it 'Most Valuable Fiction Book of 2009.' The sensational multi-prize-winning novel was named one of the best books of 2009 by Publishers Weekly, Los Angeles Times, the Washington Post and Chicago Tribune.

Raised in Queens, LaValle is the hotly tipped author of an acclaimed short story collection, Slapboxing with Jesus, and a novel, The Ecstatic. He has been the recipient of numerous prizes including a Whiting Writer's Award, a United States Artists Ford Fellowship, a Guggenheim Fellowship and the key to Southeast Queens. He is currently Writer-in-Residence at the Dutch Foundation for Literature in Amsterdam.

No Exit's Ion Mills said of the acquisition, 'Big Machine is a truly astonishing and highly original novel by an exciting new author who is being tipped for the top by everybody from the LA Times to US rapper Mos Def. It's a superb book and we are thrilled to be launching it over here.'

Big Machine will be published by No Exit Press in paperback in March 2011.

More information about the book can be found here.
Posted by Ayo Onatade at 11:46