The Return of Sherlock Holmes 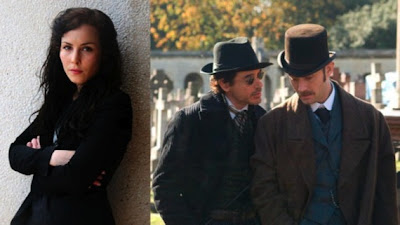 While her role as a gypsy (who Rapace describes as “a traveler [who is] cool [but] a bit crazy”) in SH2 will be far less emotionally demanding than her role in Dragon Tattoo, Rapace is already doing lots of research to make sure her character looks and feels authentic.

“I’m doing a lot of research about gypsies. I’m going to Paris to visit some gypsy camps, and I’m going to Transylvania to actually see how they live. Because the gypsies are so poor, they live pretty much the same as they did then, and they keep in the traditions and all of that, so when you go to Transylvania, for example, they live pretty close to the way they lived hundreds of years ago. So I’m listening to gypsy music and I’m learning to sing and dance.”

Rapace delivered a dramatically intense performance as troubled goth hacker Lisbeth Salander in her native country’s film adaptation of Stieg Larsson’s Millennium Trilogy starting with The Girl With the Dragon Tattoo. Which begs the question as to why Hollywood should do a reboot of the series. 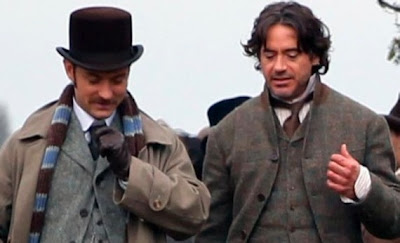 Jude Law and Robert Downey Jr. on the set of SH2.

Sherlock Holmes was very much an energetic adventure full of exciting set pieces and humour. Rapace has indicated that the sequel will be very much in a similar vein. Rachel MacAdams, who played as Irene Adler, Sherlock Holmes’s tricky love interest in the first film, will be back. Scriptwriters Kieran and Michele Mulroney were hired to pen the script for Sherlock Holmes 2.

The main plot of Sherlock Holmes 2 is still kept secret for now, but according to the rumor, Professor Moriarty, the criminal mastermind in the shadow of the first opus, will be the main villain of the upcoming sequel. The film is due for release December 2011.
Posted by Mike Stotter at 12:11