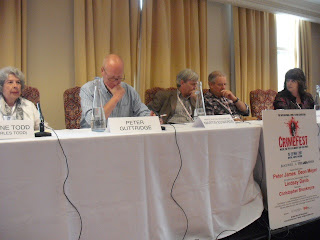 L-R Caroline Todd, Peter Guttridge, Martin Edwards, Adrian Magson & Sarah Rayne
(Picture Ayo Onatade)
Day one of Crimefest hasn't finished yet. The final panel that I attended was the one on Forgotten Authors which as I pointed out in my previous post was moderated by Martin Edwards. The panelists on Forgotten Authors in addition to Martin who was a participating moderator were Peter Guttridge, Sarah Rayne, Adrian Magson and Caroline Todd (who writes books with her son as Charles Todd). Each of the panelists spoke about two authors that were in their opinion forgotten authors. Some of them were in fact rather obscure but it was interesting to learn about them and understand why the panelists consider them to be forgotten authors.

Each of the authors after talking a bit about themselves spoke briefly about the authors that they considered to be forgotten. Peter Guttridge spoke about John Franklin Bardin a British author whose book The Last of Phillip Banter was made into a film in 1986 and featured Tony Curtis. Peter's second author was Adam Hall who is best known for the book The Quiller Memorandum. Caroline Todd spoke about George Shipway whose book The Chilian Club (aka The Yellow Room in the US) was seen not only as a political satire but considered to be too close and real to what was happening in the world at the time. The second author that she considered to be "forgotten" was William Barrett an American author whose second book The Edge of Things (1938) drew her to the author. His 1951 novel The Left Hand of God was made into a movie featuring Humphrey Bogart and was set in Chile, whilst Sidney Poitier featured in 1962 novel Lillies of the Field which was also turned into a film. Sarah Rayne's first forgotten author was Peter Van Greenway who is best known for the 1973 novel The Medusa Touch which featured Inspector Cherry and was filmed in 1978 staring Richard Burton. Her second author was Patricia Wentworth is is best known for the Miss Maud Silver series.

Adrian Magson's two authors were Adam Diment and one of my favourites Leslie Charteris who is best known as the author of the Staint novels. As Adrian explained, it was because of Adam Diment he wrote spy novels. Diment did not write many spy novels and as a result of this there is a rather mythical status about him. He wrote his first novel in 1967 - The Dolly, Dolly Spy and his last novel Think, Inc in 1971. Adrian indicated that he felt that the main protagonist in the Adam Diment novels were in fact better than Ian Fleming's James Bond. He also felt that he was ahead of his times. Not much could be said about the Saint books. As Adrian indicated, "he spent his life biffing the baddies".

Martin Edwards two authors were Charles Warren Adam also known as Charles Felix and Canon Victor L Whitechurch. Canon Whitechurch was the author of a series of railway detective novels featuring a character known as Thorpe Hazell. It was an interesting discussion and if anything it made me want to go back home and hunt down all my Saint books to re-read!

So what happened at the quiz! The quiz once again took place in The Greenhouse the pub opposite the conference hotel! Peter Guttridge who was once again quiz master produced his usual set of esoteric questions. The team I was in consisted of Maxim Jakubowski and his lovely wife Dolores, Paul Johnston, Lauren Henderson, Andrew Taylor and a lovely lady called Sarah whose surname I did not catch. The Shots team consisted of Ali Karim, Mike Stotter, Kirstie Long and Ilaria Meliconi from the independent publishers of Italian Crime novels Hersilia Press. The name of our team was The Beauty and the Beasts and we did not do too badly. We actually came second with 33 points. The winners were the International Bloggers who won with 37 1/2. I am certain that what did us in were the anagrams. But such is life. It was good fun.

More people have started to arrive and these include Matt Hilton, Priscilla Masters and Sheila Quigley. More tomorrow! The first panel is at 9:00am so I need to get my beauty sleep!
Posted by Ayo Onatade at 22:21