Final day at Crimefest and round up!

So on the final full day of crimefest was Saturday and I was rather surprised that I actually woke up let alone got up at 9:00am in the morning. I had four hours sleep having got to bed at 5am.

Saturday night was the gala dinner and the organisers had the ingenious and inspired idea to identify all the tables with the names of crime fiction detectives. Thus I found myself sitting on the Jules Maigret table. My companions on the table were fellow shots contributors Kirstie Long and Ali Karim who was accompanied by his gorgeous daughter Sophia. Also on the table were author Adrian Magson along with his lovely wife Ann, debut author Quentin Bates and JC Martin who correctly predicted the winners of the abridged and unabridged audio prizes.

The evening reception started with a drinks reception, which was hosted by Mulholland Books UK as part of their launch of their new imprint Mulholland Books UK at Hodder and Stoughton. Mulholland Books have an already impressive line up of authors that are going to be published and it will be interesting to see and read the books in due course as they have a stellar line up of authors on their roster. They also quite generously provided everyone that attended the launch with a copy of “Guilt by Association” by Marcia Clark one of the authors being published under their imprint.

The toastmaster for the evening was author Christopher Brookmyre who took to the task as toastmaster with aplomb despite the fact that he was stepping in at the last minute for Don Winslow who had to withdraw rather suddenly. Christopher had all of us in attendance in stitches of laughter on several occasions with his witty repartee and humour. As part of his duties as toastmaster Christopher had to announce the winners of a number of awards. These awards were the eDunnit Award for the best crime fiction eBook first published in hardcopy and in electronic format in the UK IN 2010. The Winner was Field Gray Philip Kerr (Quercus). The other awards that were given out were the Last Laugh Award sponsored by Goldsboro Books. David Headley the Managing Director of Goldsboro Books presented the prize which was won by LC Tyler for The Herring in the Library (Macmillan) and the unabridged and abridged Sounds of Crime Awards. The winner of the unabridged Sounds of Crime Award was Peter James for Dead Like You, whilst the winner for the abridged Sounds of Crime Award was John le Carré for Our Kind of Traitor. which was for the best humorous crime novel first published in the UK in 2010 and which was won by The eligible titles were submitted by publishers for the long list, and audio crime fiction reviewers voted to establish the short list and winning title. Once the main wining and dining had finished it was time for speeches from the featured guest authors Peter James and Deon Meyer and the 2011 CWA Cartier Diamond Dagger recipient Lindsey Davis. 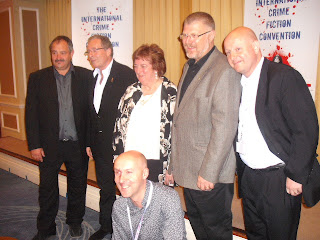 The first speech was by Deon Meyer who regaled us with a story about crime in South Africa and that sometimes the things that take place are so implausible that if they did use them in their writing then they would not be believed. Peter James (who is also the current Chair of the CWA) was a tad more serious as he used his speech to re-enforce the message that he wants to get across during his period as Chair about the fact that he wants to get rid of the notion of that genre fiction (and in this case crime fiction) is not as good as literary fiction. I have to admit that this is something that I wholeheartedly agree with. Lindsey Davis speech also had us in fits of laughter. Lindsey spoke of how she first met the toastmaster Christopher Brookmyre at a book festival at a Scandinavian book festival along with Ian Rankin. It was a really amusing anecdote, which involved lots of alcohol and herrings cooked in various different ways. Needless to say it went down very well indeed especially since of the three of them Lindsey was the one left to uphold the honour of the United Kingdom.

After all the speeches had finished, a great many of us adjourned to the bar for the rest of the night. It was great fun to catch up with and chat with people including Chris Ewan whose books The Good Thief’s Guide is a must read for those who like comic caper novels, Helen FitzGerald, Donna Moore, Paul Johnston, Christopher Wakling and Peter Guttridge to name a few. Also having fun and chatting with authors was Ali Karim’s delightful daughter Sophia who is certainly a chip off the old block!

By the time I managed to head off to bed it was the early hours of Sunday morning, I could say that I should have gone to bed earlier, but I was having too much fun. That is one of my most abiding memories of Bristol – how much fun everyone was having. Adrian and Myles put on a splendid event and amongst the chatter being heard over the weekend the phrase that seemed to dominate was how much fun it was and how well it organised was as well. Richard Reynolds of Heffers in Cambridge was the bookseller and if the scrum by the book tables were anything to go by then I hope that he sold a lot of books.

I was however determined to attend the interview that the toastmaster Christopher Brookmyre gave Maxim Jakubowski and managed to bag a front row seat to what in my opinion was one of the best interviews I have heard in ages. Christopher Brookmyre has such a comic turn of phrase and timing that it is impossible not to be in stitches. It was a wide-ranging interview and if you have heard Christopher speak before then you can imagine what it was like. It was certainly not for anyone with sensitive ears or did not like the use of the word “fuck”. I certainly enjoyed it. Once again the phrase “enjoyment” comes to mind about the whole weekend. I can only say that if I had another opportunity to listen to Christopher Brookmyre talk then I would do so with open arms. He is without doubt one of the best authors who is able to combine satire with black comedy whilst still writing an entertaining story. He also has a dry sardonic wit that is a extremely funny indeed. Furthermore how can you not want to read a novel that has the title Attack of the Unsinkable Rubber Duck or A Tale Etched in Blood and Hard Black Pencil or even All Fun And Games Until Someone Loses An Eye! I can only say that Adrian and Myles pulled off a really good thing with Christopher Brookmyre being in attendance. 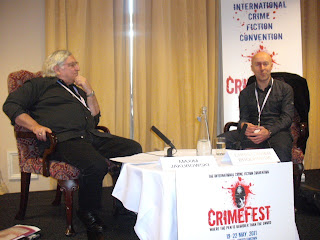 The final panel of the day is one that all of us had been waiting for. It was Criminal Mastermind. In a packed room authors John Curran, Lauren Henderson, Paul Johnston and Andrew Lane submitted themselves to the Mastermind chair and the inquisition of quizmaster Maxim Jakubowski on a wide range of specialist subjects including Sherlock Holmes and Modesty Blaise. The winner of the quiz was Paul Johnston with Lauren Henderson coming second followed by John Curran and Andrew Lane. As the winner Paul Johnston has the opportunity of returning next year to defend his title. 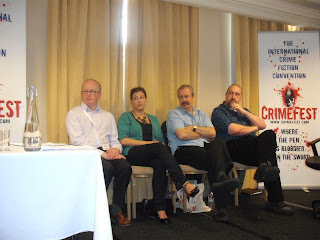 It was sad to see Crimefest finish on the Sunday but I can only say that I am sure that I am not the only one who had a fabulous time. It was well run, the panels were good and it was an enjoyable way to spend nearly 4 days.

Next year will be the 5th anniversary of Crimefest and two of the authors that we can look forward to seeing once again are Lee Child and Jeffrey Deaver. It is a festival that one should not miss and it will take place between 24th and 27th May 2012. I for one will make sure that I am there!

Great weekend, and I'm already looking forward to next year!