This blog is now seriously running behind and I can only put it down to the fact that I am having such a good time!

The last "formal" event that took place on Friday was the announcement of a number of the CWA shortlists. These were the International Dagger, the Non-Fiction Dagger, the Dagger in the Library, the Debut Dagger and the Short Story Dagger which as Chair of the Short Story panel I got to anounce. 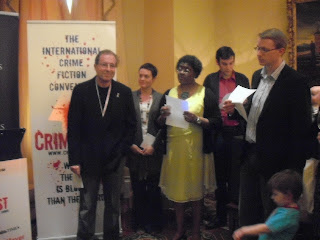 The Wings of the Sphinx by Andrea Camilleri, Tr. Stephen Sartarelli, (Mantle)


THE CWA GOLD DAGGER FOR NON-FICTION

Wilbert Rideau: In the Place of Justice (Profile)

CWA DAGGER IN THE LIBRARY

The winners will be announced at the Harrogate Crime Festival in July. Congratulations to all the nominees!

Dinner was a joyus affair. Nicci Praca from Quercus took the Shotsmag team along with Jake Kerridge, Shona MacLean, Nigel McCrery and Colin Cotterill out to dinner. We all had a wonderful time. Needless to say that once we got back to the hotel none of us went to bed immediately and I spent the evening in the pleasant company of a lady called Caroline (whose surname I must find out) and various other members of the crime fiction fraternity. So what time did I go to bed? Now that would be telling! I can only say that it was rather late and in the wee hours!