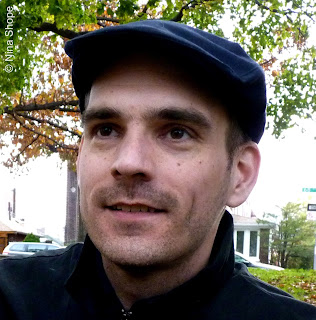 I recently saw novelist Jonathan Evison (This Is Your Life, Harriet Chance; The Revised Fundamentals of Caregiving) read at a bookstore in Denver.  During the Q & A, a woman asked him about the role of personal experience in fiction writing, and his response has stuck with me: every morning he thinks, Something will happen today that will find its way into my fiction.  Some small thing that might come back to me years later (closely paraphrased).

This was not a dressed up version of the old "write what you know" cliché. I don't necessarily believe in writing what you know, at least not exclusively: fiction, at its best, is an empathetic gesture, and that requires stepping outside of yourself.  I'm pretty sure Evison would agree: his most recent protagonist is an elderly woman who reflects on her life as death approaches.

Instead of grandiose, defining experiences, Evison was talking about those small moments we can't possibly anticipate, the contingencies that pop up every day and ultimately give our lives (and fiction) texture.  This is a beautiful, possibly spiritual idea—the fabric of life becoming, unconsciously, the fabric of art.  I started looking for these small moments in my own work.

Here are just a few examples, taken entirely out of context, from The Exiled.  I've deliberately avoided spoilers.

1.  "The (bath)room was a nearly uninterrupted mosaic of small encaustic tiles.  They covered the walls, the ceiling, the base of the toilet and sink.  Raney found no principle guiding their arrangement, no pattern or color scheme.  Like taking a shit inside the mind of a madman, he thought."

A long time ago (17 years?), I met a friend for dinner at an off-the-grid Egyptian restaurant in Queens, NY.  I knew nothing about the restaurant beforehand.  As a labor of love, the owner/chef had covered every surface—floor, tabletops, support beams, doors—with mosaics made of colored glass and tile.  He was an artist, not a psychopath, but in fiction our real-life encounters are almost always repurposed.  The restaurant has since been featured in the New York Times and is no longer off the grid, though the menu (you can order anything from hummus to lamb testicles) and ambience remain much the same.

2.  "The stoop granny had company now, was part of a small crowd gathered around a parrot in a bamboo cage.  People were laughing, listening to the bird fire off a pattern of staccato squeals.  Dunham stopped to look.
'It's the rats,' a man said.  'He imitates the rats.'"

A few years ago, the City of New York decided to tear up the street outside my apartment in Brooklyn.  The rats fled for higher ground.  My building was somehow spared, but our neighbors weren't so lucky.  Doris, who lived in the first-floor apartment directly next door, was particularly afflicted.  Doris is the type to clean grouting with a toothbrush: this was deeply traumatic for her. Shortly after the problem had passed (her husband killed them one by one with a hammer), I saw Doris standing outside, shaking and crying a little.  I asked her what was wrong.  "My bird," she said.  "He imitates the rats.  He won't stop squealing."

3.  "'Detective Raney, right?  From New York?  More people per square block than in all of this county.  You must find it dull as dirt out here."

This one is minor—just a fragment of conversation—but it stands out to me because I couldn't have been older than ten at the time.  My family lived in an apartment complex in Queens, NY.  We were visiting family in Montana.  My great uncle owned a fish hatchery, and he had a young (20?) apprentice.  Someone asked my father how many people lived in our complex.  The apprentice did some quick math and said, "A fella could have himself a girl on every block."  Lord knows why this scrap resurfaced thirty years later, while I was working on this scene, but it did.

There are many more, but you get the idea.  It's worth noting, as a kind of flourish, that I 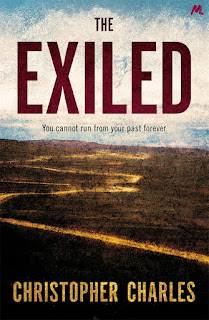 didn't leave Evison's Q & A thinking I had the subject for a future blog post.

Can we ever truly run from our past? Fifteen years ago, Detective Wes Raney was a New York City Narcotics Detective with a growing drug habit of his own. While working undercover, he made decisions that ultimately cost him not only his career, but also his family. Disgraced, Raney fled New York - but his past is finally catching up with him. For more than a decade, Raney has been living in exile, the sole murder detective covering a two-hundred mile stretch of desert in New Mexico. His solitude is his salvation - but it ends when a brutal drug deal gone wrong results in a triple murder. Staged in a locked underground bunker, the crime reawakens Raney's haunted and violent past. The Exiled follows Raney in a brilliant dual narrative that takes the reader from the crime-ridden streets of New York City in the 1980s, when crack was king, to the vast, open spaces of the American west. In both places, the only sure thing is that the choices you make will haunt you somewhere down the line...