Machinations and mistakes: Why I wrote a novel about a wrongful conviction by Julia Dahl

I started thinking about wrongful convictions in 2011, when I wrote an article about the Central Park Five – a group of black and brown teenage boys who were falsely convicted of the brutal rape and beating of a white female jogger in 1989. 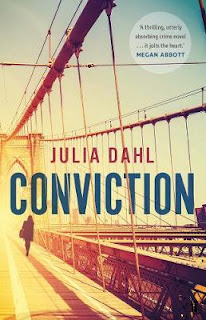 The kids, we now know, were likely coerced into confessing by cops who held them alone for hours. After serving a decade in prison, all five were exonerated in 2002 and my article examined the media’s role in perpetuating the idea that they were guilty. Tabloids called them a “wolf pack,” “animals,” and “blood-thirsty.” Donald Trump, then just a flashy real estate developer, took full-page ads in four New York papers calling for the return of the death penalty in the frenzy.

And it was, indeed, a frenzy. Like many American cities in the late 1980s and early 1990s, New York was in the grip of an historic crime wave. For perspective: There were 286 murders in New York City in 2017; in 1990, there were 2,245. People were scared, police were under pressure to make arrests, juries were eager to convict, and in the absence of DNA technology and contemporary understanding of adolescent psychology and the fallibility of eyewitness testimony, a lot of the people convicted, it turns out, were innocent.

Over the next couple years it seemed as though every week I read another article about another man being set free after serving decades in prison for a crime he did not commit. Most fit the pattern of the Central Park Five: young, black or brown-skinned males, unable to afford decent defense counsel, convicted on scant evidence often after questionable investigation and prosecution tactics

And many of them were stories that took place where I live now, in Brooklyn. It was, it seemed to me, among the most egregious injustice possible. Ten years, 20 years, 30 years locked in a cell, lost to your family and your community; lives wasted, stolen. How would someone cope with the anger? How would they survive? And what sort of combination of machinations and mistakes contributed to this cascade of injustice?

These were the questions I wanted to answer when I began writing CONVICTION. I wanted to imagine who had to screw up, who had to ignore their instincts, who had to lie to take these men’s lives away from them. And what, I wondered, were the consequences, not just for them, but for the victims, the killers still walking free, and the communities that trusted the system to protect them?

I turned to fiction, instead of journalism, to explore all this because I wanted more than what I could get on the record. I wanted inside the people and power structures; I wanted to sit inside the interrogation room and the jail cell; I wanted to stand beside the killer as he is emboldened by the conviction of the wrong man. Dark places, yes, but worth visiting.

Conviction by Julia Dahl in published in March by Faber & Faber (£7.99)
Journalist Rebekah Roberts works at New York City's sleaziest tabloid, but dreams of bigger things. When she receives a letter from a convicted murderer claiming his innocence, she sees both a story she can't ignore and, possibly, a chance. Twenty-two years earlier, just after the Crown Heights riots exploded between the black and Jewish neighbourhoods in Brooklyn, DeShawn Perkins was convicted of the brutal murder of his adoptive family. Rebekah's search for the truth is obscured by the decades that have elapsed: almost no one wants to talk about that grim, violent time in New York City not even Saul Katz, a former NYPD cop and once her inside source. A searing exploration of the tensions between New York's closed communities, Conviction is a novel about the power - and cost - of loyalty and denial.

More information about the author can be found on her website. You can also find her on Twitter @juliadahl
Posted by Ayo Onatade at 06:00