M.J. FORD on The right woman for the job (choosing a protagonist) 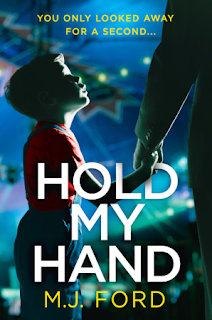 Who's story is this? It's a question story creators have to ask themselves. Looking back a hundred years, the protagonist of almost every book for adults was an adult, white male of some financial means. And there was an obvious correlation, in those regards, between the authors and their main characters and their readers. Thankfully, that tradition has been eroded. The barriers to being a writer have shifted for the better, and the novel as a form has developed in myriad directions as the reading public have democratised, while becoming more sophisticated and liberal in their tastes. There's nothing shocking, or risky, about a female protagonist, a child, an animal, an alien being, a werewolf, or even, in a recent remarkable first, an unborn foetus. The rise of the anti-hero is a case in point – the reader doesn’t have to have a great deal of empathy for the main character, but to stop a novel being simply an exercise in detached voyeurism, sympathy is crucial. We need a degree of psychological insight into a character to follow them for umpteen hundred pages.

When I’m not writing, I work as a story-creator with an editorial collective, and one of the questions we ask ourselves most often, as we brainstorm ideas, is: ‘Are we telling this story from the right point of view?’ Some times the main character we begin with just doesn’t have the dramatic potential we hoped. He or she can be retro-engineered, of course, so that inherent personality traits or personal circumstances take on more resonance within the broader themes of the story. However, sometimes we’re just looking through the wrong eyes. Perhaps the sidekick is a better choice, or even the villain of the piece. It’s an interesting exercise to consider how famous works of fiction might completely alter in tone and texture if told from different points of view: for instance, Brett Easton Ellis’s American Pyscho through the eyes of the detective (Kimball) would make a fairly good mystery yarn, though it would have almost nothing in common with the original.

When my publisher Avon came to me, a self-confessed man, with the rough idea for Hold My Hand, I didn’t have any misgivings about the prospect of the point-of-view character being female and therefore in some way outside my purview. And it shouldn’t really matter, should it? I’ve written novels for children where the main characters are girls and boys. Some of them have been vampires. Some of them have been dead. Some have been soldiers or slaves or super-powered. The point is that in fiction it’s almost always an imaginative leap into another person’s head, and a gender switch seems unremarkable compared with other mental contortions. And with Hold My Hand it makes sense for Detective Masters to be Josie rather than Joseph. From a creative perspective, it’s a no-brainer. Traditionally, most detectives have been men, both in fiction and reality. We want our characters, our heroes, to stand out and struggle against the status quo, so a female lead is an obvious choice.

Also, one of the major themes that emerged as I was writing the book is one of motherhood and the maternal instinct. This bond is tested and twisted in the novel, and Jo’s own character struggles echo and reflect the main plot strands. If she were a man, this dimension would have been shallower, and perhaps non-existent.

Finally, there’s the commercial argument, which is the least compelling to me; I’m not sure it’s even true! The majority of readers are women, across almost every genre, and a female protagonist provides a readily identifiable character. Sure, but I think the reading public are more canny than that. Do we really read to see reflections of ourselves? Or do we read to escape and to immerse ourselves in other worlds. Perhaps a bit of both.

It’s such a strange thing creating a character. I know writers who map out every detail of their protagonist’s life in advance in an effort to immerse themselves in the point of view, from their taste in music, to when they broke their arm at age eleven, to the circumstances of losing their virginity.  Even if these titbits aren’t pertinent to the plot, they’re pertinent to the character, so the argument goes, and thus they inform the writing. It’s almost a sort of ‘method’ approach, to borrow the term from acting. I don’t go to such lengths, but I’d say that in the course of getting to know one’s protagonist within the limited confines of a novel, with its action on page, its sketches of backstory, the trials undergone, the scenes that end up on the cutting room floor, one comes to know that person intimately. Perhaps even better than we know other people in our real lives, because this is a head we see inside. It’s one of the reasons I’m looking forward to starting on a sequel. I might not know Josie Masters’ favourite colour, or what grades she got at A-level, but I’d recognise her straight away across a crowded room.

Hold My Hand by M J Ford published by Avon Books
How long do you hunt for the missing? A horrible vanishing act.  When a young Josie Masters sees a boy wearing a red football shirt, Dylan Jones, being taken by a clown at a carnival, she tries to alert the crowds. But it’s too late. Dylan has disappeared.  Thirty years later, Josie is working as a police officer in Bath. The remains of the body of a child have been found complete with tatters of a torn red football shirt. Is it the boy she saw vanish in the clutches of the clown? Or is it someone else altogether?  And then another child disappears. 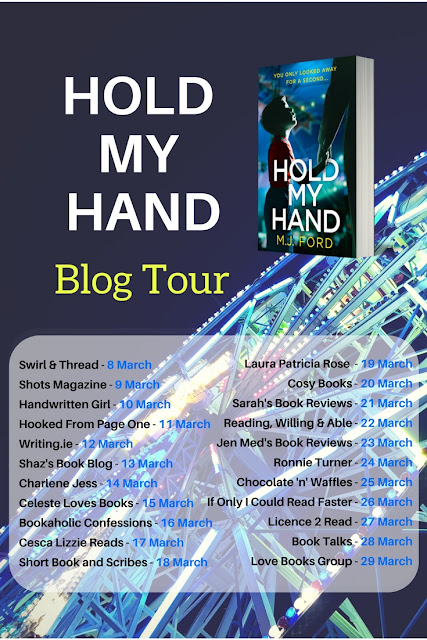