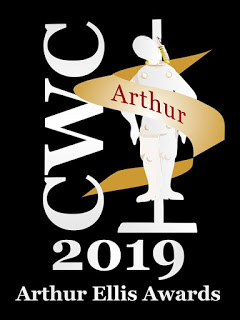 The Winters by Lisa Gabriele, Doubleday Canada
Kingdom of the Blind by Louise Penny, Minotaur Books
The Girl in the Moss by Loreth Anne White, Montlake Romance

BEST NONFICTION CRIME BOOK
Dying for a Drink: How a Prohibition Preacher Got Away With Murder by Patrick Brode, Biblioasis
The King of Con: How a Smooth-Talking Jersey Boy Made and Lost Billions, Baffled the FBI, Eluded the Mob, and Lived to Tell the Crooked Tale by Thomas Giacomaro and Natasha Stoynoff, BenBella Books, Inc,
The Boy on the Bicycle: A Forgotten Case of Wrongful Conviction in Toronto by Nate Hendley, Five Rivers Publishing
Murder by Milkshake: An Astonishing True Story of Adultery, Arsenic, and a Charismatic Killer by Eve Lazarus, Arsenal Pulp Press,
The Real Lolita: The Kidnapping of Sally Horner and the Novel that Scandalized the World by Sarah Weinman, Alfred A. Knopf Canada

BEST UNPUBLISHED MANUSCRIPT – aka The Unhanged Arthur (Sponsored by Dundurn Press)
Hypnotizing Lions by Jim Bottomley,
Omand’s Creek by Don Macdonald
The Scarlet Cross by Liv McFarlane
One for the Raven Darrow Woods, The Book of Answers by Heather McLeod,

The Derrick Murdoch Award is a special achievement award for contributions to the crime genre. Vicki Delany is a successful and prolific Canadian writer, author of (so far) 34 published books, both standalones and series. She has been a strong supporter and advocate for Canadian crime writers through her work with the Crime Writers of Canada, including serving two terms as Chair of the organization. She has also been a strong supporter of literacy and libraries across Canada and she is one of the founders of the Women Killing It literary festival, which has become a much sought after and sold-out event in Prince Edward County every year. 2019 Arthur Ellis Awards Shortlists for Excellence in Canadian Crime Writing

One for the Raven by Heather McLeod,
and The Book of Answers by Darrow Woods are actually 2 separate manuscripts.