As part of Capital Crime's social outreach initiative for the forthcoming crime festival 10 state-funded schools in and around the capital were asked to select two sixth form students who had an interest and ability in creative writing to take part in a seminar evening.  It was an opportunity for them to hear not only from authors but also others who work in publishing and other areas of the book world.  The event took place on Tuesday 2 April 2019 at Goldsboro Books.

The evening started off with an introduction by Adam Handy (co-organiser of Capital Crime) who explained what was planned for the evening.

Ali Land (author of Good Me Bad Me) was the first to give a talk from the perspective of an author.  As she explained her route to being publishing was rather unique and very rarely happened. She sent three chapters off to an agent who very quickly asked her for the rest of the bookend not long after that offered to represent her.  It was then pre-empted by Penguin She also explained that she initially spent over a decade working as a Mental Health nurse in the UK and Australia before her writing took off. Her work as a Mental Health  Nurse did help with her writing to the extent with her main character Milly.  Ali explained that in the end it took quite sometime before the book was finally ready to be published.  It was however well-worth it as Good Me Bad Me was not only shortlisted for the CWA John Creasey Dagger, short-listed twice for Dead Good Reader Awards, short-listed for the Glass Bell Award for Contemporary Fiction.  It was also a Richard and Judy Book Club pick.

After Ali Land talked about being a writer Ruth Tross spoke about what it was like working in publishing.  Ruth Tross currently works as Hodder and Mulholland crime and fiction publisher and publishes authors such as Erin Kelly, Vaseem Khan and Yrsa Sigurdardottir's
to name a few.  Ruth's talk was about the day in the life of an editor.  She also went on to explain  that she didn't actually start out in publishing but in bookselling.  When she moved into publishing it wasn't initially as an editor.  Ruth explained that there were a number of different jobs available in publishing such as working in marketing and public relations, working on book covers, selling book rights and copy editing to name a few.  She also went on to explain that it sometimes took a bit of time to find your niche within publishing. Publishing, Ruth explained was fascinating place to work in but she accepted the fact that it did still have a way to go when it came to diversity.  There are not that many people of colour  One thing that she did highlight was the fact that you had to love books to work in publishing.

Ruth Tross was followed by author James Swallow.  He also explained that his route to becoming a writer was very different to that of Ali Land's. James Swallow explained that before he started writing his Marc Dane series of action thriller novels that he had written a number of other genre novels and had worked in a number of different mediums.  He had written tie-in novels, written for Dr Who, 24, Star Trek, Stargate as well as doing audio drama for 2000AD to name a few.  James explained that as enjoyable as it was being a writer was not easy and one had to work hard at it.  The reason why he enjoyed writing the Marc Dane series of books was because they were the type of books that he himself enjoyed reading.

After a brief break David Headley also spoke.  David spoke from the point of view of a literary agent and what as an agent he looks for in a book. He explained that he gets a huge number of submissions but what can be frustrating is the fact that those submitting manuscripts do not bother to read the agents websites first of all and to follow their submission guidelines. That he explained was the first rule would be writers should be following.  There was for example no point in submitting a YA. (Young Adult) book to an agent tat does not deal with YA authors.    He also expressed the view that championing books that he felt strongly about was one of the best things about being an agent.

Faridah Ábiké-Íyímídé was also another author that spoke at the event to the students in attendance.  A YA author Faridah Ábiké-Íyímídé is currently studying English and Chinese at university.  Her YA novel Ace of Spades is due to be published in 2020. Faridah when talking to those in attendance explained that she was conscious of the fact that whilst her family were supportive it was not what they expected her to become.  They would have preferred her to become a Doctor, Lawyer, Scientist etc as they were seen as "responsible" jobs and not work in the creative industries.  Part of the problem was the fact that the publishing world did not really think that people of colour actually read which was not true. 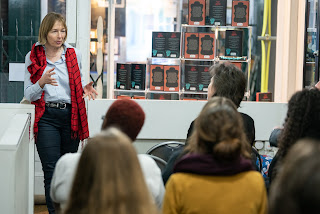 There was a great amount of enthusiasm from those in attendance who had the opportunity to see the different stages.  There was also a great deal of discussion about the different areas available in publishing tat one could actually work in. 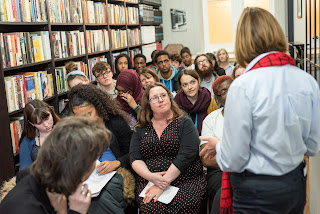 After the talk finished there was also further opportunity to have an informal chat and mingle with those that gave presentations and ask any other questions that they had.  The Out Reach event was a spectacular success and it was great to see so many enthusiastic questions being asked.

Furthermore as part of the initiative the selected students were also given a day pass for all Capital Crime events on the Saturday and further opportunity to meet established authors and publishing professionals.

Capital Crime's Social Out Reach event was a brilliant initiative in opening up the publishing world to those who would not normally think of working in the industry.

Tickets for Capital Crime are available now and can be bought from the website.
Posted by Ayo Onatade at 18:00