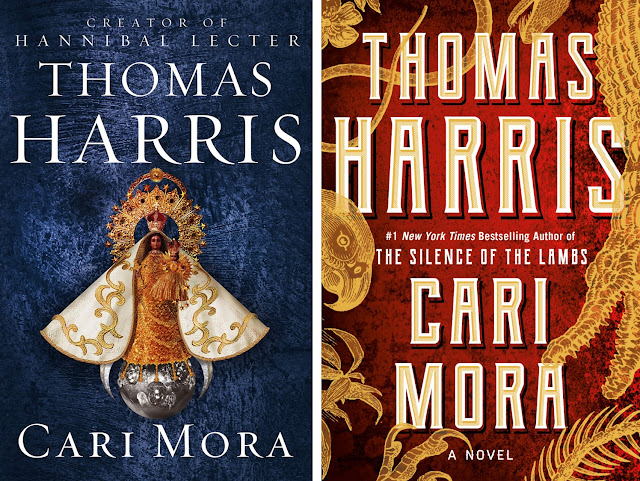 So as the excitement gathers momentum for the worldwide release of CARI MORA by Thomas Harris, from PenguinRandomHouse UK on the 16th of May 2019 and 21st May 2019 in the US from Grand Central Publishing.

I reflect in an attempt to restrain my excitement about this novel, which Harris and his publishers tease with this synopsis

Twenty-five million dollars in cartel gold lies hidden beneath a mansion on the Miami Beach waterfront. Ruthless men have tracked it for years. Leading the pack is Hans-Peter Schneider. Driven by unspeakable appetites, he makes a living fleshing out the violent fantasies of other, richer men.
Cari Mora, caretaker of the house, has escaped from the violence in her native country. She stays in Miami on a wobbly Temporary Protected Status, subject to the iron whim of ICE. She works at many jobs to survive. Beautiful, marked by war, Cari catches the eye of Hans-Peter as he closes in on the treasure. But Cari Mora has surprising skills, and her will to survive has been tested before.
Monsters lurk in the crevices between male desire and female survival. No other writer in the last century has conjured those monsters with more terrifying brilliance than Thomas Harris. Cari Mora, his sixth novel, is the long-awaited return of an American master.

It’s been seven years since we last saw a new novel by Thomas Harris, and I recall my interest in a character of his named “Dr Fell” - who is not all he seems. I also consider the surreal nature in which fact sometimes is intertwined into fiction and the existential thoughts of a writer, until they become tangible parts of our perceived reality. 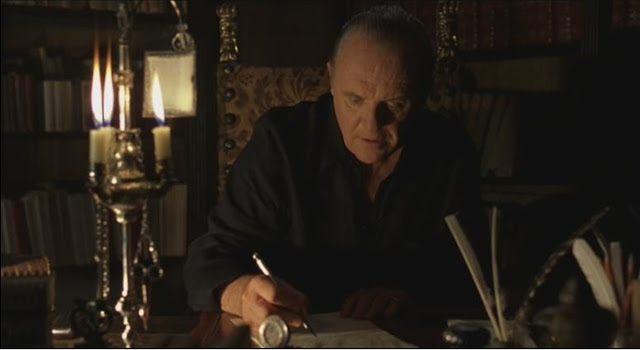 Dr Fell was a fictional character in Thomas Harris novel HANNIBAL [published on 8TH June 1999]. He was the curator of the Capponi Library in Florence, Italy, but ceased to exist when he was murdered by the fugitive Dr Hannibal Lecter, who assumed his identity in order to evade the FBI [following his escape from Baltimore, at the close of The Silence of the Lambs]. He is mentioned, but only seen as Dr Lecter’s disguise in both the 1999 novel, and the 2001 film version directed by Ridley Scott. 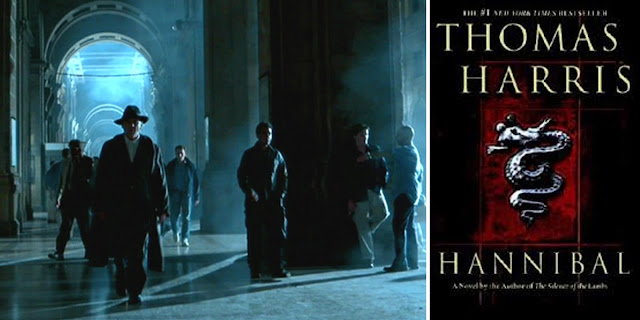 Dr Fell is given a first name ‘Roman’ and also a wife [Lydia Fell], in ANTIPASTA, the first episode of Season Three of Bryan Fuller’s NBC TV series Hannibal. Roman and Lydia Fell were murdered by Hannibal Lecter so their identities could be taken over by him [as Dr Fell] and Bedelia Du Maurier. It is alluded to that Dr Hannibal Lecter ate Dr Roman Fell, post-mortem, though it is uncertain if Lydia Fell was also eaten by Dr Lecter and / or Bedelia Du Maurier.
The origins of Thomas Harris’ use of the name Dr Fell are interesting, and there is a surreal twist where fact and fiction would merge. 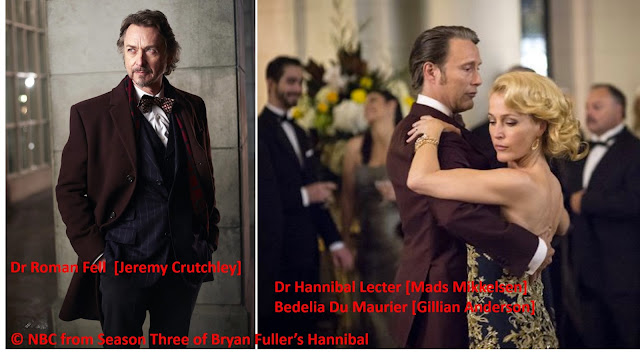 Doctor Fell appears as a name in an epigram, said to have been written by satirical English poet Tom Brown in 1680.
The anecdote associated with the origin of the rhyme is that when Brown was a student at the Christ Church, Oxford, he was caught doing mischief. The dean of Christ Church, John Fell (1625–1686), who later went on to become the Bishop of Oxford, expelled Brown; but offered to take him back if he passed a test. If Brown could extemporaneously translate the thirty-second epigram of Martial (a well-known Roman epigramist), his expulsion would be cancelled.

The epigram in Latin [Italian] is as follows:

A literal English translation is:

Brown made the impromptu English translation which became the verse:

The rhyme "I do not like thee, Doctor Fell" was not treated as a nursery rhyme, or included in Mother Goose collections, until 1926, following the rhyme's inclusion in "Less-Familiar Nursery Rhymes" by Robert Graves.

Thomas Harris, also may have referenced Dr Lecter’s non-de-plume [Dr Fell] while in hiding in Florence to a fictional detective from crime fiction’s past, the amateur sleuth, Dr Gideon Fell - a character created by John Dickson Carr. He is the protagonist of 23 mystery novels from 1933 through 1967, as well as a few short stories.

CLICK HERE for some insight from Martin Edwards literary commentator on the Golden Age of Crime Fiction, crime writer and chair of The Crime Writer’s Association regarding JD Carr and Dr Gideon Fell.

Most of Dr Fell's exploits in Carr’s narratives concern the unravelling of locked room mysteries or of "impossible crimes", not unlike how Dr Hannibal Lecter escaped from his locked cell in Baltimore [at the close of The Silence of the Lambs], which in itself was a locked room mystery. 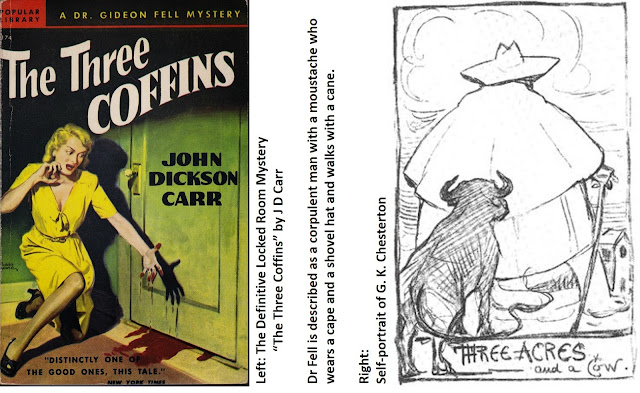 In the novel The Three Coffins by J D Carr; Dr Fell speaks of a "locked room lecture", in which he delineates many of the methods by which apparently locked-room [or impossible-crime] murders might be committed. In the course of his discourse, he states, off-handily, that he and his listeners are, of course, characters in a book, not unlike Thomas Harris’ Dr Fell / Dr Hannibal Lecter.

Though it was due to a curious twist of fate that the fictional character, Dr Hannibal Lecter would lead to the capture of the real life violent criminal Whitey Bulger, who like Lecter was in hiding in Europe under a non-de-plume. Whitey Bulger’s life has often been fictionalised to varying degrees by the work of Dennis Lehane, even inspired Jack Nicholson in The Departed as well as in the film BLACK MASS.

The breakthrough came last September when Bulger was spotted in Britain by a company executive who had befriended him in 1994. The executive recognised Bulger as the American tourist who had worked out alongside him at a health club inside Le Meridien Piccadilly hotel in central London almost 10 years earlier.

A week after September's chance encounter, the businessman was watching Hannibal, a film about the FBI search for the fictional serial killer Hannibal Lecter. In one scene, the Bureau's genuine Most Wanted List was shown in the background. 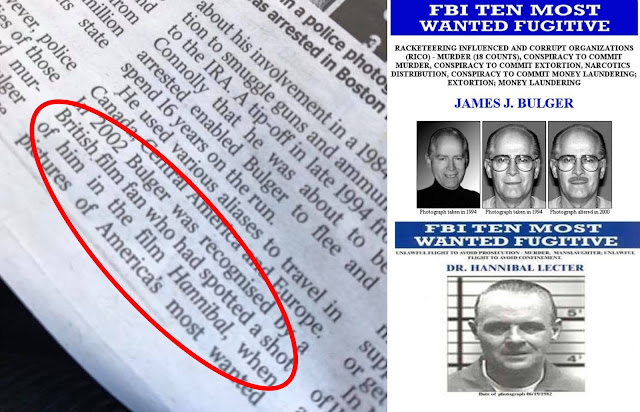 The businessman recognised Mr Bulger's face on the list and immediately contacted the FBI in Boston. He has asked police to protect his anonymity in case of reprisals.
Read More from The Telegraph [London] 26 Jan 2003 HERE

In an act of Karma, Whitey Bulger was murdered while in prison, the day before Halloween 2018, in what appears to be a ‘locked room mystery / impossible crime’ that would not be out of place in a Dr Fell narrative from John D Carr. The brutality of Whitey Bulger’s murder in a high security penitentiary [in solitary confinement] also resembles the violent and bloody escape that Dr Hannibal Lecter deployed in escaping his incarceration from Baltimore, murdering two prison warders in the process. It was of course a ‘locked room mystery’ or an ‘impossible crime’

Mr. Bulger’s death, within hours of his arrival at the prison, raised numerous questions. Mr. Bulger, a long-time federal informer and a prolific killer over several decades, knew many who would want him dead. But how was he left vulnerable to a beating so forceful that it displaced his eyeballs?

See also the Obituary from The Times, London [above]

For those who managed to reach the end of this stream of consciousness, I’ll leave you with a paragraph from Harris' 1999 novel HANNIBAL in which Dr Hannibal Lecter [disguised as Dr Fell] attends an exhibition in Florence, not to see the items on display, but he gains his pleasure watching the faces in the crowd, the ones visiting this atrocity exhibition.

“The exposition of Atrocious Torture Instruments could not fail to appeal to a connoisseur of the worst in mankind. But the essence of the worst, the true asafoetida of the human spirit, is not found in the Iron Maiden or the whetted edge; Elemental Ugliness is found in the faces of the crowd.”
Thomas Harris, Hannibal [1999]

He is a writer who understands the dark side of human nature, and that’s why I, like so many other readers around the world are seated, are pacing and are itching to read his new work CARI MORA. 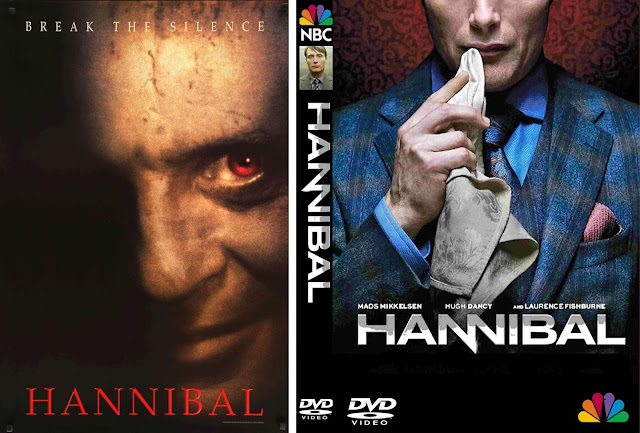 Photos © 1999 – 2019 are from A Karim, NBC, MGM Studios, PenguinRandomHouse UK, Grand Central Publishing US, The Times [London] and the Federal Bureau of Investigation