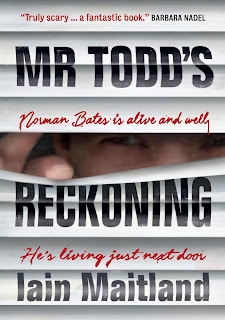 The idea for Mr Todd’s Reckoning dates back to May 2015 when my eldest son Michael, who’d spent time in hospital and The Priory with depression and anorexia, came back to live in the family home. These were tough times, to put it mildly. We thought we were going to lose him at any moment.

Michael would spend ages in the kitchen each evening snip, snip, snipping away at vegetables in a wok, cutting them into a million pieces. I would sit nearby and the constant start-stop, start-stop snipping drove me mad. I couldn’t shout “Shut up for a minute” at him, as I might have done with my other two robust children, as he was in a fragile state; things were touch and go for a long time.

I let off steam by writing what became the first scene of Mr Todd’s Reckoning – a troubled son with mental health issues and a stressed father feeling tense and edgy and having to bottle everything up – and then put it to one side whilst I wrote other books.

Dear Michael, Love Dad is a memoir telling the story of our family and Michael’s downfall. Out Of The Madhouse, co-written with Michael, tells of his days in The Priory and how he came back, slowly but surely, from the brink to become the happy person he is today. I then wrote a man-on-the run thriller, Sweet William.

When I was looking to write my next book, I came back to that snip, snip, scene and wondered if I could develop it into a novel. I had the idea of a father and son forced to live together in a tiny, cramped bungalow, unemployed, tense, feeling claustrophobic, and what might happen to them. The whole thing bubbled with possibilities. Father kills son? Son kills father? What if someone from outside then turned up – a girlfriend perhaps or maybe an old school friend?

I started writing, as I do, with only a vague sense of where it might be going – no more than one or two pivotal events in my mind. I wrote one scene at a time, edging forwards and backwards, tweaking and adding to each scene as I went along. I had settled by then on the thought that, at some point, one would lash out at the other and kill him – not meaning to – and how he would then deal with that on different levels; emotionally, practically and so on.

I found it easy to get into the minds of my two main characters – Mr Todd Senior and Mr Todd Junior. One began as angrier version of me. The other was a twitchier version of Michael. I had lots of emotions within me because of what happened with Michael; guilt, frustration, anger etc. I had an idea of how Michael’s mind worked as I had read his diaries from The Priory.

As with Sweet William, once I’d got inside the minds of my characters, the outline I had in my head changed significantly. For me, characters drive the story and where it’s all going to go. As I got to know my characters better, they started to become real people in my head – quite different from Michael and me – and took the story in a whole new direction towards the murder, mayhem and madness that you’ll read about in Mr Todd’s Reckoning.


Behind the normal door of a normal house, in a normal street, two men are slowly driving each other insane. One of them is a psychopath. The father: Mr Todd is at his wits' end. He's been robbed of his job as a tax inspector and is now stuck at home... with him. Frustrated. Lonely. Angry. Really angry. The son: Adrian has no job, no friends. He is at home all day, obsessively chopping vegetables and tap-tap-tapping on his computer. And he's getting worse, disappearing for hours at a time, sneaking off to who-knows-where? The unholy spirit: in the safety of suburbia, one man has developed a taste for killing. And he'll kill again.