V. B. Grey and her connection to a singer who died too soon.

My psychological thriller Tell Me How It Ends is inspired by post-war American noir movies and ‘women’s pictures, in particular All About Eve (1950), starring Bette Davis and Anne Baxter, and Laura (1944) with Gene Tierney and Dana Andrews.

In All About Eve Bette Davis’s character, Margo Channing (who delivers the famous line ‘Fasten your seatbelts. It’s going to be a bumpy night.’) is an award-winning New York theatre actress threatened by both the power of Hollywood and a younger rival.

My novel is set in London in 1963, the pivotal year when the 1950s truly came the Sixties, and my central character, an internationally famous singer, Delia Maxwell, is facing a similar watershed moment in her career. Delia is inspired not only by Margo Channing but also by the British singer Alma Cogan.

I must confess that I had never heard of Alma Cogan until I married her first cousin - I had only just turned twelve when she died of cancer in 1966 aged only 34. The man who became my husband was then 24 and already a photographer in London. He had grown up listening to her sing on the radio, watching from the wings as she performed at the London Palladium, and enjoying the television shows she hosted with guests including the Everley Brothers, Adam Faith and Morecambe and Wise.

Alma was a huge international star throughout the 1950s, famous as the ‘girl with a laugh in her voice’ and for her extravagantly embroidered, beaded and sparkly dresses. Her aunt, my mother-in-law, had a framed photograph of Alma being presented to the Queen at a Royal Command performance, and the singer’s skirts are more opulent than Her Majesty’s.

The child of Russian Jewish immigrants, Alma began singing professionally in 1949. While rationing continued into the years of post-war austerity, her big dresses, bouffant hair and upbeat music provided glamour and cheer that were understood and welcomed by an audience that had come through the war.

She lived in a flat in Kensington High Street where the family mingled with visiting American actors and singers, including Cary Grant, Audrey Hepburn, Danny Kaye and Sammy Davis Jr, who taught my former husband to tap dance.

But, as the 1950s finally gave way to the 1960s, Alma struggled to reinvent herself. Her signature larger-than-life look was hopelessly old-fashioned; other female vocalists such as Dusty Springfield were turning successfully to soul music; and the format of her light entertainment shows appeared staid beside the youthful informality of Ready, Steady, Go.

Alma became very good friends with The Beatles – Paul McCartney wrote Yesterday at her piano, naming it ‘Scrambled Eggs’ in honour of what she’d just cooked for him, and she was rumoured to have had an affair with John Lennon, whose affectionate nickname for her was Sara Sequin – yet she wasn’t part of the Swinging Sixties generation. Teenagers had no real memories of the war and no desire to look back. To them, Alma was a merely singer who appealed to their parents.

Although tragically Alma became ill and died before she could fully re-invent herself, the family stories of how consciously – sometimes following John Lennon’s advice – she went about changing her clothes and hair-style and altering her music to suit a more intimate cabaret style fed directly into the choices facing Delia Maxwell in Tell Me How It Ends.

And, of course, like Margo Channing, Delia also has a dangerous younger rival. In All About Eve, Eve Harrington’s stories about her tragic past are shown to be lies. In my novel I wanted to explore what genuine reasons might drive a young woman who came of age in the 1960s to seek to destroy an older star’s career.

For the 1960s were not only about pop music and mini skirts. There were dark undercurrents. 1963 saw John Profumo resign and Christine Keeler arrested; Kim Philby was named as the ‘third man’ in the Moscow spy ring; the Kray Twins were feted as celebrities and the Great Train Robbers almost got away with millions; in November, President Kennedy was assassinated in Dallas, Texas.

And, even in the Swinging Sixties, not all the shadows of war had gone away. 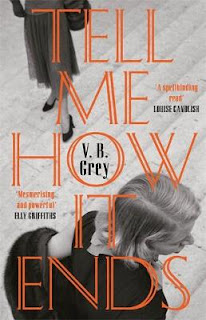 Tell Me How It Ends by V B Grey.


Delia Maxwell is an international singing sensation, an icon of 1950s glamour who is still riding high on the new 60s scene. Adored by millions, all men want to be with her, all women want to be her. But one woman wants it maybe a little too much...  Lily Brooks has watched Delia all her life, studying her music and her on-stage mannerisms. Now she has a dream job as Delia's assistant - but is there more to her attachment than the admiration of a fan? Private investigator Frank is beginning to wonder.  As Lily steps into Delia's spotlight, and Delia encourages her ambitious protegee, Frank's suspicions of Lily's ulterior motives increase. But are his own feelings for Delia clouding his judgement?   The truth is something far darker: the shocking result of years of pain and rage, rooted in Europe's darkest hour. If Delia thought she had put her past behind her, she had better start watching her back.

Tell Me How It Ends is published by Quercus on 9 July.

V. B. Grey is the pseudonym of screenwriter and novelist Isabelle Grey who has written two novels of psychological suspense and four books in the D.I. Grace Fisher crime series.
Posted by Ayo Onatade at 08:00