Countdown to the Daggers!! 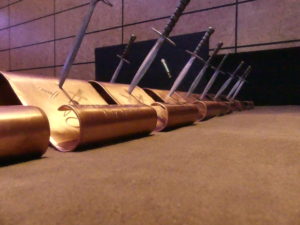 Tickets are available from today (Thurs 15 Oct) for the virtual awards ceremony of the 2020 Crime Writers’ Association (CWA) Daggers, which honour the very best in crime writing.

The oldest awards in the genre, the CWA Daggers have been synonymous with quality crime writing for over half a century. The awards take place live via Zoom webinar on Thursday 22 October from 7.30pm.

The night is compered by book reviewer, author and journalist Barry Forshaw, one of the UK’s leading experts on crime fiction. Guest speaker will be TV presenter and Pointless creator, Richard Osman, whose debut The Thursday Murder Club became a record-breaking Sunday Times number one bestseller.

Barry Forshaw said: “The Daggers are one of the annual highlights in the literary calendar. The crime writing and reading community is famed for its convivial events, and although virtual, we still promise an entertaining and engaging evening for these Oscars of the crime genre.”

Winners of the Daggers – including the Gold for best crime novel, the Ian Fleming Steel for best thriller, the ALCS Gold for Non-fiction, the John Creasey (New Blood) for first-time authors, and the Sapere Books Historical Dagger – will be announced on the night.

Shortlisted authors for the 10 coveted Daggers include Mick Herron, Eva Dolan, Abir Mukherjee, Casey Cep and Christopher Brookmyre. The awards also feature the Best Crime and Mystery Publisher of the Year and the Dagger in the Library, voted exclusively by librarians, chosen for the author’s body of work and support of libraries. The winner of the Debut Dagger will also be announced – a competition for unpublished writers which can lead to them securing representation and a publishing contract.

One of the UK’s most prominent societies for the promotion and promulgation of crime writing, the CWA was founded in 1953 by John Creasy; the awards started in 1955 with its first award going to Winston Graham, best known for Poldark. They are regarded by the publishing world as the foremost British awards for crime-writing.

Tickets are free, but limited. To book a place, visit:

The Shortlists in Full:

What You Pay For by Claire Askew (Hodder & Stoughton)

This is Gomorrah by Tom Chatfield (Hodder & Stoughton)

One Way Out by AA Dhand (Bantam Press)

Your House Will Pay by Steph Cha (Faber & Faber)

The Wreckage by Robin Morgan-Bentley (Trapeze)

The Man on the Street by Trevor Wood (Quercus Fiction)

The Bully by Jeffery Deaver, in Exit Wounds, edited by Paul B Kane and Marie O’Regan (Titan Books)

The New Lad by Paul Finch, in Exit Wounds, edited by Paul B Kane and Marie O’Regan (Titan Books)

#Me Too by Lauren Henderson, in Invisible Blood, edited by Maxim Jakubowski (Titan Books)

The Recipe by Louise Jensen, in Exit Wounds, edited by Paul B Kane and Marie O’Regan (Titan Books)

Easily Made by Syd Moore, in 12 Strange Days of Christmas (Point Blank Press)

The Professor and the Parson: A Story of Desire, Deceit and Defrocking by Adam Sisman (Profile Books)

DAGGER IN THE LIBRARY

The Spae-Wife by Anna Caig