Agatha Christie’s Poirot: Piecing Together the Evidence by Mark Aldridge 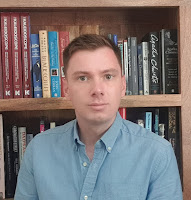 Like so many books, Agatha Christie’s Poirot: The Greatest Detective in the World (HarperCollins, 2020) had a long genesis, drawing as it does on research that began eight years ago. However, it hasn’t been a straightforward journey from the inception of the idea to the final product, as I first undertook serious research about Agatha Christie for my 2016 book Agatha Christie on Screen. At the time I was puzzled by the fact that there had never been a detailed overall history of the development of the many film and television adaptations of Christie – something especially curious when I knew how perennially popular they were. So, for that book (published as part of Palgrave Macmillan’s Crime Files series) I decided to start my research from scratch, working my way through the various archives that held Christie-related material. Had I known that there was so much, I may have reduced my plans, as the result was a mammoth tome running to over 160,000 words – twice as long as my publisher had agreed!

Nevertheless, Agatha Christie on Screen was published in its entirety and seemed to attract a fair amount of attention from Christie fans as well as the academic community. I knew that I’d found a lot more in my research than just material covering the adaptations, and as a Christie fan myself I knew that I still had more to say. It then it occurred to me that there really wasn’t an up-to-date volume that both casual fans and aficionados could consult that would give them background information on of Christie’s original works as well as the adaptations, which could also highlight points of interest and give an idea of how each story or production was received. And so, once again, I decided that if the book didn’t exist, then I should write it! Obviously a single volume covering the entirety of Christie’s works would be far too long, but then I thought about Poirot’s centenary in 2020, which seemed to be very good timing. Thankfully, both HarperCollins and Agatha Christie Ltd agreed that my plans to tell the full story of the detective’s various appearances seemed worthwhile, which meant that work could begin on a book dedicated to the adventures of Hercule Poirot on page, stage, screen – and beyond.

One thing that was very important to me was that I wanted to make sure that the book featured new information, in order to ensure it was really good value for fans who might think that they had heard everything before. This meant many days at various archives, combing through information looking for the slightest detail that told us more about Christie’s plans, or those who adapted her work – whether it was an incomplete idea for a play of The Mysterious Affair at Styles buried at the back of one of her notebooks, or the original (radically different) plans for the television series that would eventually lead to David Suchet’s Poirot, I found that there was a lot still to discover, and frankly I couldn’t wait to share it all with other devoted fans. This new material included previously unpublished Christie correspondence and extracts from various writings that hadn’t seen the light of day before – all important when thinking about the wider story that influenced the Poirot stories, and a special bonus for fans who have read everything else written by the Queen of Crime.

I discovered both Christie’s original stories and the adaptations of them at pretty much the same time when I was a young child, so for me their stories have always been intertwined – and I was interested to see how often that was true in the past as well, especially from the 1960s onwards. It was because of these related histories that I decided to structure my book chronologically, with each book, short story collection, play, film or television series having its own section. This meant that everything that falls under the broad ‘Poirot’ banner could either be read individually (if the reader is just dipping in to sections that particularly interest them) or as part of the larger tapestry. I also decided to make the main text of the book spoiler-free, so that those who are new to Poirot can still enjoy all of the mysteries as they were intended to be read – without the solution being given away in advance!

With the addition of over 400 pictures in the hardback edition, the final result is a book that I hope achieves its aims of being a perfect introductory guide to the world of Agatha Christie’s creation, while still showing us that there is much still to learn about the sleuth who considers that he is probably The Greatest Detective in the World.

Agatha Christie’s Poirot: The Greatest Detective in the World (HarperCollins, 2020)

From the very first book publication in 1920 to the film release of Death on the Nile in December 2020, this investigation into Agatha Christie's Hercule Poirot celebrates a century of probably the world's favourite fictional detective. This book tells his story decade-by-decade, exploring his appearances not only in the original novels, short stories and plays but also across stage, screen and radio productions. The hardback edition includes more than 400 illustrations. Poirot has had near-permanent presence in the public eye ever since the 1920 publication of The Mysterious Affair at Styles. From character development, publication history and private discussion concerning the original stories themselves, to early forays on to the stage and screen, the story of Poirot is as fascinating as it is enduring. Based on the author's original research, review excerpts and original Agatha Christie correspondence, Poirot: The Greatest Detective in the World is a lively and accessible history of the character, offering new information and helpful pieces of context, that will delight all Agatha Christie fans, from a new generation of readers to those already highly familiar with the canon.

Dr Mark Aldridge is a senior lecturer at Solent University, Southampton, and author of the book Agatha Christie’s Poirot: The Greatest Detective in the World.