WHAT A CHARACTER! by Peter Bartram 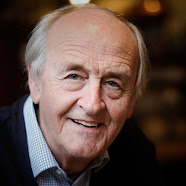 When you’re writing a series of books based around the same characters, you face a real problem. How are you going to keep the characters fresh as they move from one adventure to the next?

This problem is not without complications for the writer. One well-respected author of police procedurals once told me that his wife almost fell out with him when she discovered he’d killed off the partner of his protagonist detective in the first chapter of a new book.

Never fear! The detective went on to take up with an attractive and resourceful lady friend in later books in the successful series.

In the case of my Crampton of the Chronicle series, the problem of character development snuck up on me. When I started to write Headline Murder, I’d imagined it would be a one-off. It never occurred to me that the characters were going to live into the future.

It wasn’t until I was labouring over the last 10,000 words that had an inkling that there might be a second book in all this. That meant I had to resolve how I ended the relationship between the protagonist Colin Crampton, a crime reporter on the Brighton Evening Chronicle, and his girlfriend, Shirley Goldsmith, a young Australian working her way around the world.

Colin and Shirley are both a strong-willed and argumentative pair – a bit of a Beatrice and Benedick – and have an on-off relationship. Colin regularly lets Shirley down when his work calls. And when he devises a scam, Shirley ends up holding the sticky end. But she’s got a sharp tongue and knows how to fight back.

I thought the one-off book I was writing was all going to end happily for Colin and Shirley. Perhaps not wedding bells, but at least some kind of lasting peace and life together.

But once a second book appeared on the horizon, that seemed just all too pat. The happy-ever-after ending would have set Colin and Shirley’s relationship in aspic for ever. I needed something more ambiguous – and if that could include a couple of quick plot twists in the last couple of chapters, all the better. The result was that Shirley turns up in a hot action scene in the second book – Stop Press Murder – in a way that changes Colin and Shirley’s relationship even more.

So, here I am, on the thirteenth book in the series – eight full-length novels, four novellas and book of short stories – and Colin and Shirley are still at one another. This time, in The Beach Party Mystery, the trouble centres over the fact Shirley is offered a part in a James Bond film.

So, for Colin and Shirley, the series has been a roller-coaster ride. And, for the time being at least, I can’t see the end of the track. 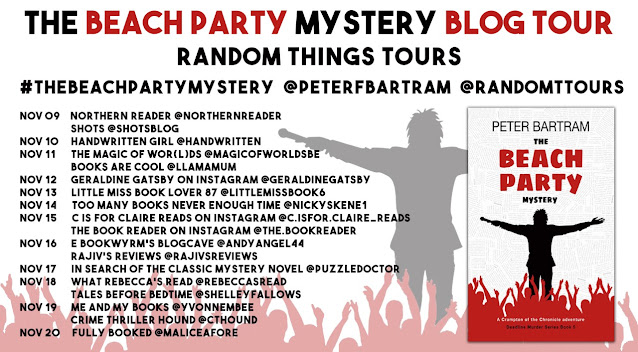 The Beach Party Mystery, by Peter Bartram (Deadline Murder Series Book 5) is available as e-book or in paperback: https://getbook.at/tbpm

Brighton is about to host its most exciting beach party ever – with the world’s biggest name in rock music headlining the show. It seems a world away from the work of Evening Chronicle crime reporter Colin Crampton. But that’s before fraudster Claude Winterbottom is beaten to death. As Colin investigates the crime, he finds there are too many suspects. Like Manfred Crouchpenny, the fattest loan shark in the world. Or Jeremiah Clarke, leader of a band of purity campaigners. And who is the mystery woman who hides behind the pseudonym Astraea? The climax explodes on a pirate radio ship moored off the British coast. There are laughs alongside the action as Colin and feisty girlfriend Shirley Goldsmith race against time to save countless lives at the beach party.