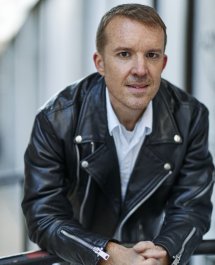 It started with my grandmother’s bookshelf. This was the grandmother I got along with, which was convenient since I spent as much time at her house as at home. It was a modest bookshelf--two dozen ceramic knick-knacks taking pride of place at eye level with the floor-level shelves left for my grandmother’s small collection of aging paperbacks. I imagine things were arranged that way for my benefit. Keeping the breakables safe from the curious toddler.

The curious toddler grew up, but remained curious. Eventually I started pulling out those old paperbacks. The covers caught me first: colourful, sinister, many featuring gun-wielding women showing enough skin that made me think these weren’t for children.

So of course I read them.

I don’t remember if I liked them much. I was very young and was still working on the Hardy Boys and Nancy Drew. But they stuck with me. Those hardboiled heroes from half a century before.

Fast forward a few decades. I was going through my own bookshelves--less modest than my grandmother’s since I didn’t have to make room for curios, though I probably have some of the same titles she had. Maybe even the same editions, since my fondness for lurid covers remains.

I was shelving a Rex Stout novel and thought, “I think I’d like to read that again.” One thing led to another and I ended up spending a season doing a reread and sometimes first read of all of Stout’s Nero Wolfe books in chronological order. It wasn’t a hard task since I have a great fondness for Stout, who married the traditional English murder mystery with the hardboiled American voice.

Somewhere in there I began wondering what kind of story I would tell if I decided to play in that particular sandbox. I’d spent the last two decades as a playwright writing almost exclusively female protagonists, many of them queer. And most of my plays deal with characters learning to thrive in a world that, for one reason or other, is set against them.

Very quickly, Lillian Pentecost and Will Parker emerged. The reserved genius thriving in spite of (or to spite) her multiple sclerosis and her circus-trained protege who is learning to be a working detective one hard-won lesson at a time.

As for why I put them in 1945, it’s because life shouldn’t be easy for a hardboiled hero. That time was a pivot point in American culture. Coming off the high of the war and turning inward--to infrastructure and suburbia and family-building, but also to paranoia and fear, the McCarthy hearings and the Lavender Scare. The next decade won’t be kind to Will, a bisexual woman with a chip on her shoulder, and her boss, a woman who’s more interested in doing what’s right than what’s legal. And unlike Stout’s novels, I plan to have these two detectives grow and change as the world around them becomes a particularly difficult place to live if you’re different.

Hopefully I’ll find a collection of readers who will love Lillian and Will as much as I do. And hopefully they’ll tuck them away on the bottom shelf. All the better for a new generation of curious children. 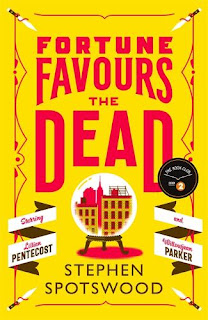 Fortune Favours The Dead by Stephen Spotswood. (published in hardback on 12th November 2020 by Wildfire)

New York, 1946. Lillian Pentecost is the most successful private detective in the city, but her health is failing. She hires an assistant to help with the investigative legwork. Willowjean Parker is a circus runaway. Quick-witted and street-smart, she’s a jack-of-all-trades with a unique skill-set. She can pick locks blindfolded, wrestle men twice her size, and throw knives with deadly precision - all of which come in handy working for Ms P. When wealthy young widow Abigail Collins is murdered and the police are making no progress, Pentecost and Parker are hired by the family to track down the culprit. On Halloween night, there was a costume party at the Collins’ mansion, where a fortune teller performed a séance which greatly disturbed Abigail. Several hours later her body was discovered bludgeoned to death in her late husband’s office. Problem is, the door to the office was locked from the inside. There was no-one else in the room, and the murder weapon was beside the victim; the fortune teller’s crystal ball. It looks like an impossible crime, but Pentecost and Parker know there is no such thing...

OK, you've convinced me. Anyone who mentions reading Rex Stout's Nero Wolfe series in order gets my attention. I will be trying this one out as soon as I can get a copy.