and varied perspectives on violence and justice 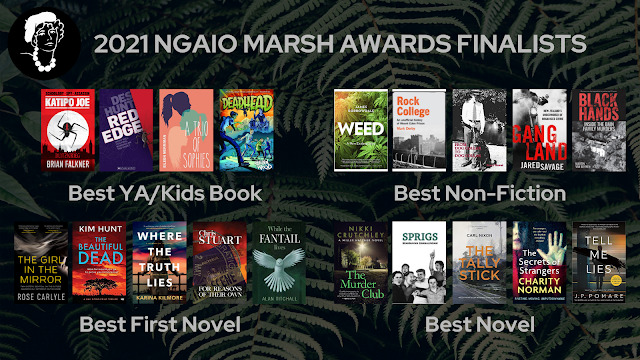 From journalists hunting justice to communities upturned by sudden violence, the authors of the 2021 Ngaio Marsh Awards finalists explore the motives and impacts of some of the starkest criminal justice issues facing Aotearoa.

“In a tough year for so many, including our entrants and international judges who’ve been living through a variety of rāhui and lockdowns, I’m grateful we can take this moment to celebrate some of our talented Kiwi authors whose compelling books give us insight into other lives and explore some big issues,” says Ngaio Marsh Awards founder Craig Sisterson.

“As people smarter than me have said, including Val McDermid and Dennis Lehane, if you want to better understand a place, read its crime fiction,” says Sisterson. “Crime writing in its wider sense can deliver plenty of deep insights alongside rollicking entertainment, and is an ideal form for delving into character and the whydunnit, as well as broader societal issues.”

From corporate crime to sexual violence, gangs to mental health, a variety of such issues are explored through the fiction and non-fiction books honoured as finalists in the 2021 Ngaios.

This year, a special award honouring outstanding YA and children’s books has also been introduced. The finalists for the Ngaio Marsh Award for Best YA/Kids Book are:

“Many of us develop our love for reading, and all the benefits that brings throughout our lives, thanks to children’s authors,” says Sisterson. “We’re delighted to now celebrate some of our best local exponents of kids’ mysteries and thrillers with a special award.”

The finalists for this year’s Ngaio Marsh Award for Best Non-Fiction, a biennial prize previously won by Michael Bennett in 2017 for IN DARK PLACES, a book about the wrongful conviction of Teina Pora, and by Kelly Dennett in 2019 for THE SHORT LIFE AND MYSTERIOUS DEATH OF JANE FURLONG, are:

Each of this year’s non-fiction finalists delivered compelling stories that immersed readers in the subject matter of their books, from our most notorious prison to one of our most notorious cases, along with insights into life during and after a police career, New Zealand’s potted history with marijuana, and the rising underworld of organised crime and violent gangs.

The finalists for the 2021 Ngaio Marsh Award for Best First Novel, an annual award for crime and thriller tales from debut authors that was first won by Raymond Berard in 2016 for INSIDE THE BLACK HORSE, recently adapted into the screen drama Vegas, are:

“It’s really heartening each year to see a range of new voices infusing fresh perspectives into the crime and thriller backstreets of our local literary landscape,” says Sisterson. “Hopefully we’ll see many of this year’s debut entrants keep on publishing exciting tales in future.”

“It’s a strong group of finalists to emerge from a dazzlingly varied field,” says Sisterson. “This year’s entrants gave our international judging panels lots to chew over, and plenty of books judges enjoyed and admired didn’t become finalists. ‘Yeahnoir’, our local spin on some of the world’s most popular storytelling forms, is certainly in fine health.”

The winners of the 2021 Ngaio Marsh Awards will be announced at a special streaming event on Saturday 30 October, held in association with WORD Christchurch.

A video. of the finalists can also be seen below.