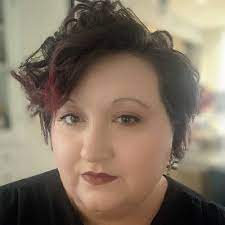 Audra Colfax is the mysterious and captivating star painting student at the center of my debut thriller, Dark Things I Adore. She’s in her third and final year of a Boston-based MFA program in painting, working on her thesis collection, when she lures her predatory professor and thesis advisor, Max Durant, to her remote home in Maine. She’s told him that the invitation has been extended so that he may view her collection-in-progress and provide professional feedback – but they both know this is a ruse. Max is convinced Audra has invited him to her inner sanctum to consummate the long-simmering sexual tension he senses between them. But Max couldn’t be more wrong. Audra has lured the charismatic artist to Maine for much darker, much more devious reasons; indeed, every detail of their weekend away together is engineered toward one thing – revenge.

As Audra executes her plan, guiding Max through the broken ephemera of his sordid past, Audra takes Max to her painting studio to look at her thesis paintings. Here is how Audra describes her project:

Here is a quick tour—without spoilers!—through the ten objects that Audra focuses on in her thesis collection “Her Dark Things,” the paintings at the center of Dark Things I Adore. The items are carefully selected by Audra to provoke Max; they are clues, they are indictments.