Books to Look Forward to from Oneworld and Point Blank Press 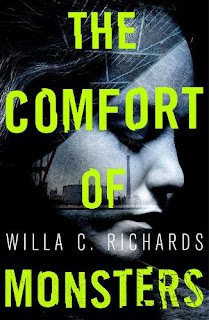 In the summer of 1991, teen Dee McBride vanished in the city of Milwaukee. It was the summer the Journal Sentinel dubbed 'the deadliest . . . in the history of Milwaukee.' Serial killer Jeffrey Dahmer's heinous crimes dominated the headlines and the disappearance of one girl was easily overlooked. 2019, nearly thirty years later, Dee's sister, Peg, is still haunted by her disappearance. Desperate to find out what happened to her, the family hire a psychic and Peg is plunged back into the past. But Peg's hazy recollections are far from easy to interpret and digging deep into her memory raises terrifying questions. How much trust can we place in our own recollections? How often are our memories altered by the very act of speaking them aloud? And what does it mean to bear witness in a world where even our own stories about what happened are inherently suspect? The Comfort of Monsters is by Willa C Richards.

A Loyal Traitor is by Tim Glister. Duty or honour. Which would you betray? It's 1966. London is swinging, and the Cold War is spiralling. Clear cut lines have faded to grey areas. Whispers of conspiracies are everywhere. Spies on both sides of the iron curtain are running in circles, chasing constant plots and counterplots. And MI5 agent Richard Knox is tired of all of it. But when Abey Bennett, his CIA comrade in arms, appears in London with a ghost from Knox's past and a terrifying warning that could change the balance of power in the Cold War for good, he has to fight to save the future. He must also face an agonising choice: who will he believe, and who will he betray - his duty to his country or his loyalty to his friends?

Everyone deserves a second chance. After a car accident killed her husband and left her permanently scarred, Kat Alexander, a wealthy widow, starts a new life in the countryside. Mourning not only her husband but her last chance of motherhood, Kat is completely lost. Until she meets Ginny, who runs the local animal sanctuary and offers Kat a lifeline. The two become inseparable and Ginny encourages Kat to join the local branch of Young and Widowed, dubbed the Coffin Club by its members. There she meets Nico, a young Spanish widower with a five-year-old daughter Magdalena 'Midge'. Nico is gorgeous - good-looking, kind, caring - and wants to settle in the UK permanently. Kat would do anything to be a mother and Nico can offer her just that. Marriage seems like the perfect option but how well do they really know each other? The Coffin Club is by Jacqueline Sutherland.

Chemical Cocktail is by Fiona Erskine. Jaq Silver is back with a bang in this high-octane third novel in the series. When Jaq Silver's mother dies, she is handed a poisoned chalice. An inheritance more valuable to her than she could have imagined. Travelling from Portugal to Brazil amid conspiracies and corruption to get to the bottom of her family mystery, Jaq learns she is not the only one with an interest in her unusual inheritance. Racing against the clock as the threats to her life increase on all sides, Jaq must use her scientific know-how to save what matters most.