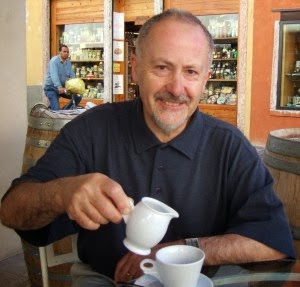 Russell James is a former Chairman of the Crime Writers Association of Great Britain, an author of over 12 historical novels and crime novels as well as a number of non-fiction books including Great British Fictional Detectives and its companion work, Great British Fictional Villains.  His latest book is Exit 39 which is as he explains an “iPhone novel”.

Russell:          Despite the apparent lightness of tone (yes, I do do lightness - sometimes!) this is a very personal book for me, one that had to be dragged out practically against my will. (I've sat on this story for decades.) The dysfunctional family is based on my own - the one I was brought up in. Yes, the mother-from-hell was, or could be seen as, an unkind portrait of my own. Am I saying she was that terrible to me? No, but to my step-brother - and it's his story that Exit 39 tells. He is the narrator. Having said that, I should make it clear that the book moves a long way from either his life or mine - or my mother's come to that. Our childhood was the inspiration. Exit 39 is not an account of it. (Any resemblance . . . et cetera.)


Russell:          Of course. My kids bought me one a couple of years ago - and I don't use it in the way Crosby does in the book. Writers aren't constantly on the move (okay, you, Ali and Mike are but . . . ); we sit at our desks; we work from home. So I use mine mainly as a tablet. For Facebook, Twitter and, especially, as a portable iPlayer. (Oh, also as a camera.) Everyone uses their phone in their own way. That's part of the joy of the things.

Russell:          Totally. Well, "Pick Any Title" had a similar lightness and humour (though it was a thriller, for Christ's sake). No other book was as personal, and that may be why I went for the light touch here rather than anything resembling a misery memoir, It certainly isn't that! Also, after a couple of historicals and several non-fiction books, this is my most bang up-to-date 2013 novel.


Russell:          Slow down and smell the coffee. Better still, smell the trees. I remember Tom Wolfe saying the best advice he could give anybody was, "Leave the building." I agree. We're in a 24/7 world - but you don't have to obey all the rules. They're other people's rules. 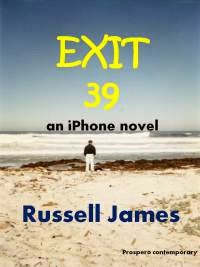 Russell:          I want a lot of people to read it. I know, I know - doesn't every writer? But now that I've allowed it to come out - and because it's a breakout novel for me - I've chosen this unusual way of launching it: by making it entirely free for the first month. Will it work? Watch this space.


Russell:          Another crime book - but with a twist. Yes, again, I know, I know, but I don't mean a twist in the sense that so many crime novels have twists, I mean a twist that practically no other writer has come up with. So, yet again, I shall come out with a book nobody expects. That's what has infuriated my publishers over the years; I'm unpredictable; I don't do what they want; I don't obey the rules.


Anyway, you're going to have to wait for that one. You may see it in spring. Or maybe summer. This winter your task, should you choose to accept it, is to read Exit 39. - And get it now, in November - while it's free.


More information about Russell and his work can be found here.  Russell can also be found on Twitter @getRussellJames.
Posted by Ayo Onatade at 15:35