Gwen Moffat was the first woman to qualify as a mountain guide in the UK and is one of the greatest female climbers this country has ever produced. She is also a prolific writer and novelist, with more than 30 books to her name. We at SHOTS know her better for the numerous book reviews she has written over the many years. In fact, if memory serves, Gwen was writing for SHOTS back in the day when it was Called A SHOT IN THE DARK, and even before I became involved. So it's nice to turn the spotlight on Gwen as Orion/Phoenix publishes her autobiography on November 7th 2013, paperback £12.99


In 1945, when Gwen Moffat was in her twenties, she deserted from her post as a driver and dispatch rider in the Army and went to live rough in Wales and Cornwall, climbing and living on practically nothing. She hitch-hiked her way around, travelling from Skye to Chamonix and many places in between, with all her possessions on her back, although these amounted to little more than a rope and a sleeping bag.


When the money ran out, she worked as a forester, went winkle-picking on the Isle of Skye, acted as the helmsman of a schooner and did a stint as an artist's model. And always there were the mountains, drawing her away from a 'proper' job.


Throughout this unique story, there are acutely observed accounts of mountaineering exploits as Moffat tackles the toughest climbs and goes on to become Britain's leading female climber - and the first woman to qualify as a mountain guide.

As a story of climbing and compulsive love of mountains, SPACE BELOW MY FEET is magnificent — 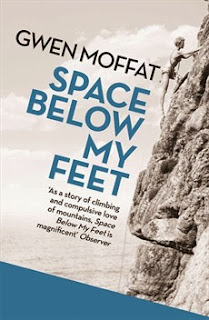 Happy Birthday CWA
On 5th November 2013 the Crime Writers' Association celebrated their 60th birthday (founded in 1953) at a special event held in Foyles bookshop on Charing Cross Road in central London. It also announced the results of a poll that asked its members to pick the foremost author and books in the genre. Christie triumphed in two of the three categories. “With her elegant precision and her perfect sense of place, she is still our most popular crime author,” proclaimed CWA chair Alison Joseph. Its full results are below.
CWA Best Ever Novel:
The Murder of Roger Ackroyd (1926), by Agatha Christie
Also nominated: The Big Sleep (1939) by Raymond Chandler
Gorky Park (1981), by Martin Cruz Smith
The Hound of the Baskervilles (1902) by Arthur Conan Doyle
The Long Goodbye (1953) by Raymond Chandler
The Moonstone (1868) by Wilkie Collins
Murder on the Orient Express (1934) by Agatha Christie
The Nine Tailors (1934) by Dorothy L. Sayers
On Beulah Height (1998) by Reginald Hill
and The Silence of the Lambs (1988), by Thomas Harris
CWA Best Ever Crime Author:
Agatha Christie
Also nominated: Raymond Chandler, Arthur Conan Doyle, Dashiell Hammett, Reginald Hill, P.D. James, Elmore Leonard, Ruth Rendell, Dorothy L. Sayers, and Georges Simenon
CWA Best Ever Crime Series: Sherlock Holmes, from Arthur Conan Doyle
Also nominated: Albert Campion, from Margery Allingham; Adam Dalgliesh, from P.D. James; Dalziel and Pascoe, from Reginald Hill; Philip Marlowe, from Raymond Chandler; Inspector Morse, from Colin Dexter; Hercule Poirot, from Agatha Christie; John Rebus, from Ian Rankin; and Lord Peter Wimsey, from Dorothy L. Sayers
Posted by Mike Stotter at 09:28