Michael Connelly, The Gods of Guilt and Bosch.

Sold Out! That was the situation on Friday 22 November 2013 for many a fan that turned up hoping to get a last minute ticket for the Michael Connelly event that took place at Waterstones Piccadilly in London.  Even with the event not due to start until 6:30pm queues had started to form from around 5:30pm.  There were over 100 people in the audience for what was shaping up to be one of the most anticipated events in the crime fiction calendar.

Michael had flown in early on Friday morning hot foot from wrapping up the filming for the television pilot Bosch in Los Angeles.  Before the Waterstones Piccadilly event in the evening he had already done a signing at Waterstones Leadenhall Market where fans formed a long queue waiting patiently to get their books signed.

Journalist Michael Carlson started the event off with a brief introduction about Michael Connelly and his work and how well regarded he was within the crime fiction community.  He explained that they would be talking about his new Mickey Haller book The Gods of Guilt and the proposed new television series Bosch.

At the beginning of the event Michael Connelly explained that The Gods of Guilt is as much a Mickey Haller legal thriller as it is a detective novel.  He found it nice to hear people say that it is a good legal thriller but he considers it to be more than that. The latest novel presents a much more rounded Haller as it is essentially a low point in his life with all his relationships especially his relationship with his daughter which is at a all time low.  He indicated that he wanted to connect all the books together.  The film the Lincoln Lawyer was a success in the States but not so much in the UK. As a result of the success of the film in the States he now had lawyers coming up to him.  It inspired  him to write a scene in his current book on the film.

Michael Carlson pointed out that one of the issues that he had with the film was the fact that they failed to show what was inside the trunk of his car.

Michael Connelly explained that he had also worked on a series called Level 9 which was the first of its kind.  However the show debuted against CSI and only lasted six episodes.   Level 9 had been his idea but he gave it to others who took it in a direction he would not have.  In contrast to this, he is very heavily involved with Bosch. He stated that writers in Hollywood do not have as much veto as he has on the show. He is immersed in it because he wanted it to be done right. He would not have agreed to do it with people who have not read the books.  Amazon heard of the project and came to him. Currently there is nothing on the show that he does not agree with. Bosch is being played by character actor Titus Welliver.  They went through a whole series of casting and they had to use a lot of caution. He pointed out that Homicide and The Wire were two other programmes that he had worked on.

With regard to the filming of Bosch the first season is due to be based on City of Bones.  The


challenge that they have with Bosch is the fact that he is an internal thinker but that they had to get the essence of him in the script.  The show is called Bosch because it is about him.  Michael was asked if there was a Harry Bosch play list for the show but he explained that whilst music is very important the music being played in the show is not all jazz but a variety.  The most thrilling moment of the filming was not a speaking part but when some music was just being played as it was felt to be right out from the book.  Bosch's house is a very important location in the scenes and during the filming where they were filming was just like in the books. He was asked how was Harry's house recreated for the show.  The show was filmed on a different street because it worked better.  If the show does get picked up then they will have to properly recreate the house.  This time they borrowed a house.  Whilst they were filming a real life coyote wanded on to the film set.  The books have aged in time and during this period he has had several different partners and supervisors.  With the show they have brought in people who came before and after the City of Bones.  The backstory in the TV series is that Bosch was in the 1st Gulf War as opposed to the Vietnam War.  Both the Vietnam War and the 1st Gulf War had tunnel rats.  There are similarities and differences.   Harvey Pounds plays  the Head of a Task Force as opposed to Bosch's supervisor.  There is also a lot of the Concrete Blonde in the show.   They have 3 LA Police Detectives as consultants on the show. The show will be up on the Amazon website in March.  The show is very much like the book hence the reason why he likes the way Amazon have done it. Asked if the show would affect his writing, Michael Connelly explained that it would not.

He is currently working on a new Harry Bosch novel at the moment for next year.   He is 100 pages into the new book. He stopped writing on 1st October when he became a lot more heavily involved with the project.  However as soon as his tour in the UK is over then he will be back to writing the book.  He explained that he is the harshest critic of his own work and that if he felt that it was no longer working then there would not be anymore Harry Bosch books.

Michael was asked if he was going to throw out any more pitches? He said that he would like to do the L A Dodgers as he is a fan.  There is a scene in the show were Bosch is following a man and he has to change his disguise.  They wanted to use a Dodgers cap but unfortunately they were not allowed to do so.  Therefore in the show you will see him wearing a plain cap.

Asked if there was anything he had learnt since he had started writing, he stated that he had learnt and kept a strong work ethic.  It helped him to write a book a year and was why he was currently feeling ansty about not writing.

Los Angeles being such a huge part of Harry Bosch, Michael was asked whether it was a big wrench when he left. Michael explained that he lived in LA for 15 years and moved 7 years ago to Florida.  He had reached the point where he needed to see LA from afar.  He pointed out that James Ellroy had done the same thing.

If the television series takes off he may have to leave Florida and move back to LA.  Not living in LA reamped his desire to get it right.  Now he goes to every physical location in the books to get it right.   He feels that the books that he has written since he moved to Florida  seem to be a lot more accurate.  However, seeing the way in which the locations were being scouted for the show made him realise that he does not do as much scouting as he thought.  He also pointed out that he had already started to plant seeds in his various books for the future. He could also go back in time and talk about early Harry Bosch.  He explained that he did see an end to Bosch in contemporary LA. 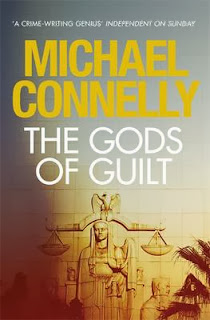 Talking about Mickey Haller he explained that he had originally intended it to be only one book but he ended up liking the character and therefore wanted to return to him.  He also said that he was not yet done with Jack McEvoy who will at some stage be back.  Asked if he took notes Michael explained that he rarely took notes as he wanted people to talk freely.  What he does do is send notes to himself on his phone.  His research is normally done on a social level.  He takes cops out to breakfast.   He said that was how he managed to get the first line of the Lincoln Lawyer which he wrote on his cocktail napkin.

After the event Michael patiently signed books and had his photograph taken for over an hour for all those who queued up.   The event itself was a huge success and it was brilliant to listen to Michael talk about his work specifically The Gods of Guilt, the new series Bosch and his work in general.

More information about Michael Connelly and his work can be found on his website.  He also has a Facebook page and can be found at MichaelConnellyBooks.  You can also follow him on Twitter @Connellybooks.

The video for The Gods of Guilt can be seen below.