The UK cover reveal for CWA Gold Dagger winner Robert Wilson whose book You Will Never Find Me is due to be published by Orion on 13 February 2014.

Robert Wilson has worked across the world, including spells shipbroking, tour-guiding and exporting bathrooms to Nigeria. After escaping car crashes, civil wars and angry baboons, he and his wife settled in Portugal. Since then, he's written 10 acclaimed crime novels including the CWA GOLD DAGGER AWARD winner, A SMALL DEATH IN LISBON. His Portuguese set series featuring Javier Falcon was adapted for television by Sky Atlantic. CAPITAL PUNISHMENT, the first in the Charlie Boxer series was shortlisted for the CWA Steel Dagger. 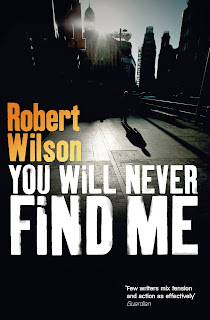 Charlie Boxer messed up his family life. First the army, then the police, then high-stakes kidnap and recovery, his ex-wife and daughter learnt to live without him as his work took him places no man can come back from unscarred.