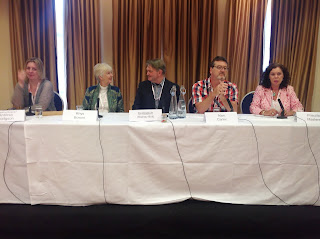 Well, the second panel that I attended yesterday was the heroes and antihero panel which featured Priscilla Masters, Rhys Bowen, Alan Carter, Rodney Bolt (Britta Bolt) and Antonia Hodgson as the participating moderator.

One of the initial questions that the panel discussed was where does the protagonist fit? Are they hero's or antihero's?  According to Priscilla Masters her character Joanna Piercy has flaws which are part of her personality.  Alan Carter explained that his main character is an interfering do-gooder who has currently been sent to the equivalent of "police Serbia" due to his behaviour, so he sees him as an anti-hero. Britta Bolt stated that character flaws are an obsession.

The panellists were also asked who their favourite heroes and anti-heroes were?  Alan Carter stated that his favourite anti-hero was Graham Hurley's Paul Winter.  Britta Bolt indicated that his were the original Sherlock Holmes and Watson.  Rhys Bowen said that she really did not like Jeff Lindsay's character Dexter. Priscilla Masters noted that another anti-hero was Jackson Brodie.  She felt that he came across as a twat. Alan Carter indicated that he felt that Jack Cafferty from the Rebus novels is an antihero.  One of the other questions that was discussed was the popularity of anti-heroes and why they had become so popular over the years.     Also whether or not a true anti-hero had to have that Ripley/ Dexter darkness to make them believeable?  Poirot was seen as hero but also someone who was not liked very much as he came across as someone who knew too much.  This changed slightly just before he died as he was seen as being slightly more vulnerable.

One thing that was agreed was the fact that the crime genre is good at doing the anti-villain.  A lot of crime novels are also about a victim who has been turned into anti-villain.  It was also agreed that anti-heroes are also fun to write but where would you draw the line? Also, are the best crime novels the ones where the antihero takes on aspects of the hero?

What else happened yesterday?  SJI Holliday nearly did not make it to her panel.  She had me in fits of laughter as she was explaining that her ticket was booked for Bristol Parkway instead of Bristol Temple Meads and that she missed her station on her way down to Bristol and thought that the next stop would be Bristol Temple Meads.  Alas not!  The next stop was Newport in Wales so she had to get off there and make her way back to Bristol.  Luckily she had factored in some extra time and managed to get to CrimeFest by the skin of her teeth.

Dinner last night was with the lovely David Headley (co-owner of Goldsboro Books) who is running the bookshop this year along with Daniel Gedon, Harry Illingworth, Sophie Portas, L C Tyler, John Curran and Kate Lyall Grant.  It was a wonderful dinner with much hilarity.

Today has however been tempered by hearing the news that B B King has died.  This is so sad  and not nice especially since we have just lost Ben E King!

As usual more to follow about Friday's panels in due course!