Ragnar Jónasson on Snowblind and Influences

Today's guest blog is by Icelandic crime writer Ragnar Jónasson. He talks about the influences on his writing.

I think that a writer is influenced, consciously or not, by everything he or she reads. And having read more than a bit of English-language crime and detective fiction through the years, I am very proud to have my Dark Iceland series published in English for the first time, with Snowblind, the first of the series, now available.

Although I’m not the best judge of the key influences that my favourite writers may have had on my work, I think it’s safe to say that I have tried to place great emphasis on setting, something I find very important and have long admired in the books of Agatha Christie and P.D. James. In a way, the setting of my series might possibly be regarded as one of the major “characters” in the stories. Snowblind is set in the northernmost town in Iceland, Siglufjordur, a place surrounded by mountains and the sea, accessible only via mountain tunnels. In the winter, the 24-hour darkness combines with avalanches and unremitting snowstorms to create a claustrophobic setting – a place where no one can enter and no one can leave when the weather is at its worst.
I mention Agatha Christie in particular because I’ve been reading her books with great enjoyment since I was twelve. From the age of seventeen until I embarked on my own writing career I used to translate Christie books into Icelandic – a total of fourteen novels plus some short stories – alongside my studies and day job as a lawyer. Christie is undoubtedly an important influence on the majority of crime writers; whether they aspire to write like her or not, she is very often used as a benchmark. Her plotting was, of course, magnificent; the twists so often simple yet deeply clever. It’s hard to choose a favourite from the Christie oeuvre, but titles that spring to mind include Murder on the Links and The Murder of Roger Ackroyd. 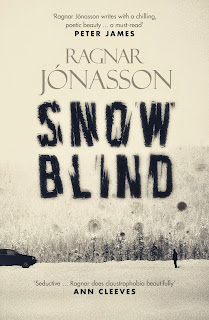 Also hailing from the Golden Age of crime, another of my influences has to be Ellery Queen and his (their) early detective novels. They managed to create a very likable detective and to plot terrific whodunnits. My own favourite is The Dutch Shoe Mystery, which was written in 1931. Another “Golden Age” American who springs to mind and whose books I’ve thoroughly enjoyed is S.S. Van Dine, the creator of the entertaining sleuth Philo Vance; from that series I would recommend The Greene Murder Case (1929).
Scottish author Josephine Tey is another wonderful crime writer whom I admire, but her career was, unfortunately, far too short. Her books are very different from the classic whodunnits of her contemporaries, but very cleverly plotted and filled with great atmosphere. One of my best-loved Tey novels is The Franchise Affair, a brilliant mystery from 1948.
Amongst more contemporary crime writers, P.D. James was certainly one of the very best, with every single one of her books offering a real treat. She had a talent for great settings but her biggest strength, I believe, lay in her characters. She managed to create extraordinarily memorable characters, and not just Dalgliesh or her other protagonists; each and every suspect comes to life on the pages and remains with the reader long after the book has finished. I was fortunate enough to meet James on a couple of occasions, and I also interviewed her for an Icelandic newspaper; she was a wonderful person as well as one of the greatest crime writers of all time. The last three Dalgliesh novels are my favourites: The Private Patient (2008), The Lighthouse (2005) and The Murder Room (2001).

I am fairly certain that all of the wonderful authors I’ve mentioned have had some influence on my work, in one way or another, and these are authors whose books I continue to read (or re-read). It’s certainly nice to sit down in the evening, when an Icelandic snowstorm is raging outside, and get caught up in the world of Poirot, Marple, Queen, Vance, Grant or Dalgliesh. And then it’s back to my desk to join my character Ari Thor, and see where his next exploits will take me. 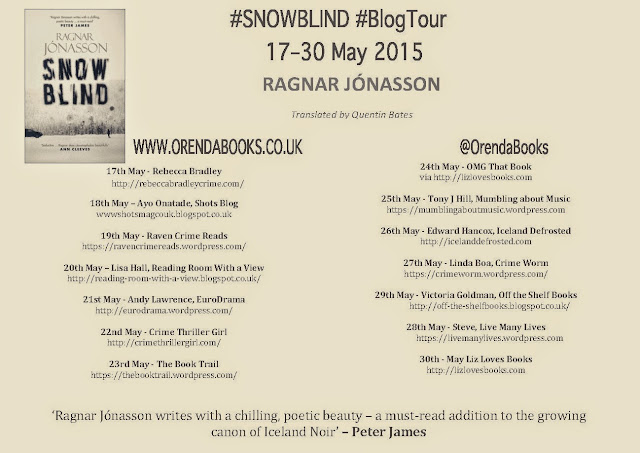 Snowblind
Siglufjöro›ur: an idyllically quiet fishing village in Northern Iceland, where no one locks their doors – accessible only via a small mountain tunnel. Ari Thór Arason: a rookie policeman on his first posting, far from his girlfriend in Reykjavik – with a past that he’s unable to leave behind. When a young woman is found lying half-naked in the snow, bleeding and unconscious, and a highly esteemed, elderly writer falls to his death in the local theatre, Ari is dragged straight into the heart of a community where he can trust no one, and secrets and lies are a way of life. An avalanche and unremitting snowstorms close the mountain pass, and the 24-hour darkness threatens to push Ari over the edge, as curtains begin to twitch, and his investigation becomes increasingly complex, chilling and personal. Past plays tag with the present and the claustrophobic tension mounts, while Ari is thrust ever deeper into his own darkness – blinded by snow, and with a killer on the loose. Taut and terrifying, Snowblind is a startling debut from an extraordinary new talent, taking Nordic Noir to soaring new heights.

Snowblind by Ragnar Jónasson (Trans by Quentin Bates) is published on 15 June by Orenda Books, Price £8.99

Icelandic crime writer Ragnar Jónasson was born in Reykjavik in 1976, and currently works as a lawyer, while teaching copyright law at the Reykjavik University Law School. In the past, he’s worked in TV and radio, including as a news reporter for the Icelandic National Broadcasting Service. Before embarking on a writing career, Ragnar translated 14 Agatha Christie novels into Icelandic, and has had several short stories published in German, English and Icelandic literary magazines. Ragnar set up the first overseas chapter of the CWA (Crime Writers’ Association) in Reykjavik, and is co-founder of the international crime-writing festival Iceland Noir. Ragnar Jónasson has written five novels in the Dark Iceland series, and he is currently working on his sixth. He lives in Reykjavik with his wife and two daughters. Nightblind will be published by Orenda Books in 2016
Posted by Ayo Onatade at 00:00