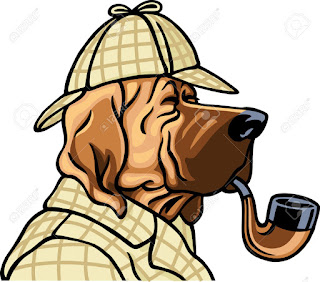 Since its origins in the mid nineteenth century, detective fiction has been populated by a huge array of beasts.

If the genre begins, as is widely supposed (though not without some debate), with Edgar Allen Poe’s ‘Murders in the Rue Morgue’ (1841), then detective fiction’s very first culprit is an animal. Such beastly instances of criminal violence are among the genre’s most recurrent figurings of the non-human. Accordingly, like Poe’s frenzied ourang-outang on the spree in Paris, Arthur Conan Doyle’s Hound of the Baskervilles (1902) identifies a murderous aggression as part-and-parcel of animal nature.

Detective fiction accommodates gentler and more law-abiding creatures too, however. Wilkie Collins, often thought of as the founder of the British detective novel, depicts the villain Count Fosco in The Woman in White (1859) surrounded by his ‘pretties’, ‘a cockatoo, two canary-birds and a whole family of white mice’, while Koko and Yum Yum, the feline sidekicks of Lillian Jackson Braun’s popular The Cat Who… series from the 1960s show animals living on the right side of the law.

Detective fiction is also consistently concerned with the human as animal. From the ‘bloodhound’ Sherlock Holmes to Dashiell Hammett’s ‘wolfish’ Sam Spade, detection involves the development of beastly characteristics. Comparably, the criminal is often imagined as the animal in human form, a sign of the descent back down the evolutionary ladder towards a savage state the founder of criminology Cesare Lombroso identified as ‘criminal atavism’.

Though often described as an essentially conservative form, the best examples of detective fiction unsettle rigid binarisms to intersect with developing concerns in animal studies: animal agency, the complexities of human/animal interaction, the politics and literary aesthetics of animal violence and victimhood, animal metaphor and the intricate ideological work of ‘animality’.

This volume will be the first to engage thoroughly with the manifold animal lives in this enduringly popular and continually morphing literary form. We are interested in essays that investigate the portrayal of animals in the detective fiction of any period and any region. It is anticipated that the volume will include essays that explore the genre’s most celebrated figures (Poe, Conan Doyle, Agatha Christie, Dorothy Sayers, Raymond Chandler, Georges Simenon, Hammett, Walter Mosley etc), alongside less well-known authors. We particularly welcome essays which combine questions of genre with attention to broader ethical and political concerns regarding the representation of animals, encompassing relevant theoretical developments in, for example, animal studies, posthumanism and ecocriticism.

The volume is intended to form part of Palgrave Studies in Animals and Literature, edited by Susan McHugh, Robert McKay and John Miller
(http://www.palgrave.com/series/palgrave-studies-in-animals-and-literature/PSAAL/).

Please email abstracts of no more than 300 words along with a short biographical statement to -
Ruth Hawthorn (rhawthorn@lincoln.ac.uk) and John Miller (John.Miller@sheffield.ac.uk) by 31st March 2017. Essays will be commissioned by 1st May 2017 for delivery in Winter 2017/2018.