The start of something beautiful? Spicer joins the CTU 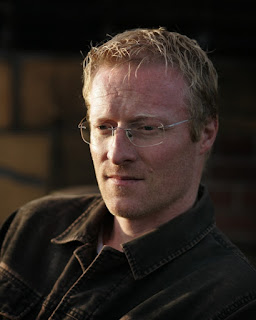 As part of the #SpicerIsBack blog tour Chris Simms ponders whether it is the start of something beautiful with Detective Constable Spicer joining the CTU!

Lovable big lunk or stubborn old sod, you can’t miss Jon Spicer. At six feet four and over fifteen stone, he believes in making an impression – especially with those who break the law. The days of falling down police station stairs might be over, but Jon still knows ways to make scrotes suffer.

Unfortunately for him, this uncompromising attitude – so useful when confronting violent criminals – is less effective when dealing with fellow officers. And so, at the start of Death Games, we find Spicer has finally been thrown out of Greater Manchester Police’s Major Incident Team. With only the Counter Terrorism Unit prepared to take him in, Jon has had to accept a demotion in rank to Detective Constable and the humiliation of a probationary period.

But it’s not all doom and gloom.

Having completed his training as a Specialist Firearms Officer, Jon gets to power round the city in an unmarked car with one major item in its boot: a weapons box. Inside are lots of shiny toys.

Weaponry isn’t the only thing that’s new to Jon. He also has to gain acceptance from a fresh set of colleagues, many much younger than him. His physical presence and fearsome reputation impresses a lot of them, but not all. Especially a particular female detective called Iona Khan.

I wrote DC Khan to be the polar opposite of DC Spicer. While Jon is tall, she is short (just over five feet tall). He likes to wade in without waiting; she likes to step back and assess. He enjoys sparring with his colleagues in the police station gym; she’s more likely to challenge them to chess.

And what they do have in common isn’t necessarily a recipe for friendship either: both are determined characters who hate to give up. Fine if they can agree on the best way forward... 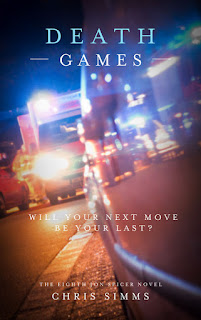 Away from work, the two officers are very different. Married with kids, Jon is the father-figure of his family. Iona is the baby of hers. A career in the police isn’t something her academic parents approve of, especially not in the male-dominated, testosterone-fuelled CTU.

In Death Games, evidence has emerged that some kind of terror attack is about to be launched in the north-west. Spicer and Khan are part of the team trying to track an elusive figure that fled from the scene of a car crash. They soon realise it’s a chase where the price of losing will be the loss of life – including theirs.

When it occurred to me that Spicer and Khan could make an interesting pair, part of me wondered why I hadn’t realised that before. Now their paths have crossed – and I hope you enjoy seeing how things work out.

Death Games is by Chris Simms and is out now.

Death Games : Will your next move be your last?
Manchester: an injured survivor from a motorway pile-up flees the scene, leaving behind evidence that a terror attack is being planned… . Jon Spicer, newly trained as a Specialist Firearms Officer, has joined Manchester police’s Counter Terrorism Unit. Thrown out of his previous department and demoted to Detective Constable, he is being kept in the force only because he’ll take on the most dangerous of jobs.  Iona Khan is struggling to find respect and recognition in the male-dominated Counter Terrorism Unit. Her mind might be sharp, but many of her colleagues value physical strength above anything else.  As the investigation quickly snowballs, Spicer and Khan are thrown together. The two officers must learn to trust each other – and fast. Because in this chase, any wrong move could be your last. 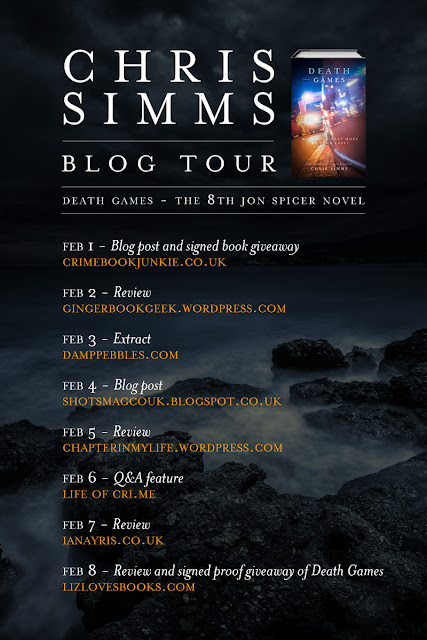 Chris Simms has worked in airports, nightclubs, post offices and telesales centres. He now lives in Marple, near Manchester, with his wife and four children. He still works as a freelance copywriter for advertising agencies in the city.  Along with nominations for the Theakston’s Crime Novel of the Year award and Crime Writers’ Association Daggers (for his novels and short stories), Chris was selected by Waterstones as one of their ‘25 Authors For The Future’.  More info about Chris and his writing can be found at http://chrissimms.info/
You can also find him on Facebook.