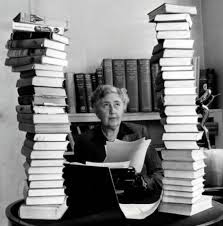 Chapter proposals are invited for an edited collection exploring and evaluating the role of war in Agatha Christie’s life and writing.

Christie’s work is now recognised not only as a distraction from twentieth-century anxieties and conflicts but also as a way of processing them. Christie’s career was created out of her war work in a Torquay dispensary and her awareness of Belgian refugees; her first husband Archibald Christie was an airman during the First World War and her second husband Max Mallowan served in North Africa during the Second, leaving her behind in Blitzed London. Her work cannot be considered as insulated from these conflicts; themes of displacement, violence, military masculinity and women’s duty resonate throughout her fiction. Gill Plain and Alison Light, for example, have examined the traces of the First World War in the bodies and social scenes of Christie’s Golden Age fiction, while recent television adaptations of And Then There Were None (2015) and Witness for the Prosecution (2016) brought subtexts of post-traumatic stress disorder and social upheaval into the foreground as well as heightening military imagery through lighting and flashbacks.

Engaging with the legacy of the First World War is part of a turn away from a narratological focus on Christie and the clue-puzzle towards a multiplicity of feminist, queer, and sociological readings that contextualise Christie’s work within its contemporary literary, political, and social environments. Existing scholarship tends to focus on World Wars, especially the First, but Christie’s life and career covered diverse fields, stages, and modes of warfare. We aim to present the first detailed study of the theme of war in Christie’s fiction and life-writing, spanning a range of conflicts in England, Europe, the British Empire and beyond, and responses to events from the Boer War to the Cold War.