Thomas Enger on The Henning Juul series - my inspiration

A lot of people have asked me: "How did you go about creating Henning Juul as a 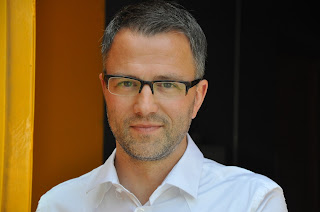 character?" "And how is it even possible to know that you are going to write five novels?"

Let me tell you how it all began. In the space of almost 15 years I made four attempts at writing a novel. None of them were published. Number three and four came quite close to making it, but it wasn't to be. So when the idea for this new character (Henning Juul) came to me, I sat down and asked myself: are you good enough to pursue a career as an author? Maybe you should try something different?

So I started thinking about TV. Maybe that format would suit me better. And I wanted to do something that hadn't been done before on television. I wanted the series to say something about our society in a satirical kind of way, and at the same time be as suspenseful as it could possibly be.

So I thought of Henning Juul as the journalistic equivalent to Dexter, you know the one? The crime scene investigator who runs around killing people who he deems unworthy to live? I thought of Henning as a man running around killing people that somehow deserved it, but he needed a motivation. This is where Henning's son comes into play. What if Henning was trying to find his son's killer? What if he justified his actions that way?

I remember writing scenes like Henning walking down the streets of Oslo, and then there would be this guy in the background painting a picture with his penis and people standing by applauding while drinking huge amounts of red wine (yeah, VERY satirical). I wrote a scene where a man was talking to someone on the banks of Akerselva, the river that runs through parts of Oslo, with a lot of dead sea gulls floating by at the same time with no one seeming to care. Old people trying to sell drugs to the police in the open. Taxi drivers offloading their cars after they had only gone about 2000 miles. Things like that.

And I sat down and wrote all these different stories, what kind of people Henning should kill in each episode, and why. And of course, how that all should lead to Henning finding his son's killer. At one point I thought it was going to be 12 episodes. Then I got it down to eight. It even went as far as me meeting with the head of development at NRK - Norway's biggest producer of TV series. The guy told me he loved the idea, and he wanted me to write a pitch that - if it was good enough - could result in me getting some working money.

At that point I was unemployed, and I needed an income quite quickly. And then, all of a sudden, the man I had met in with in NRK decided to quit, and he handed me over to this other guy who was involved in a production somewhere up north in Norway. And he was just impossible to get in touch with.

So there I was, with an idea for a TV series but with no real prospects of getting anywhere with it. So I said to myself: hey, you're really on to something here. This is a good idea. Why don't you go back to your original goal when you started writing? Why don't you see if you can write this universe as a novel series instead? 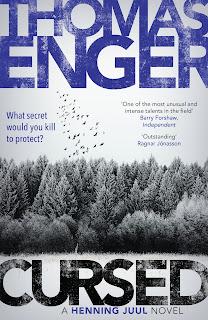 But because I had made four unsuccessful attempts, I decided to try to figure out what I previously had done wrong. I quickly realised that I had written stories set in cities I had never been to. I had written about people and environments I knew nothing or very little about. And I hadn't mapped anything out before I started writing.

But I had a great plan for Henning Juul. And I had made him a journalist, like I once had been myself. He lived in Oslo, like I did. And because the novel format is largely different from a TV series, I decided to get rid of all the satire and concentrate on the main issue at hand: Henning Juul finding his son's killer. And once that was in place, it was just a matter of mapping out the stories in a slightly different manner. When I was finished with that I realised I had material for six novels (it turned out to be five, but I'll tell you more about that in a later).

I still hadn't found any work, so I decided to make contact with two publishers in Oslo, and the very next day I was invited to a meeting with Gyldendal - one of the biggest publishers in Norway. They loved the idea, and they wanted me to start writing right away.

So that's what I did.

Six weeks later I presented them with the first 120 pages of what was later to become Burned, volume one in the Henning Juul series, and based on those 120 pages Gyldendal told me they wanted to publish the whole series.

I guess you can imagine what that felt like, having tried to become an author for 15 years. I was unemployed, I had no income. Now all of a sudden I was about to get published for the first time.

What's really amazing is that seven years later the Henning Juul series is just one step away from actually becoming a TV series. Funny how life works out sometimes, right?

Cursed by Thomas Enger is published by Orenda Books

When Hedda Hellberg fails to return from a retreat in Italy, her husband discovers that his wife’s life is tangled in mystery. Hedda never left Oslo, the retreat has no record of her and, what’s more, she appears to be connected to the death of an old man, gunned down on the first day of the hunting season in the depths of the Swedish forests. Henning Juul becomes involved in the case when his ex-wife joins in the search for the missing woman, and the estranged pair find themselves enmeshed both in the murky secrets of one of Norway’s wealthiest families, and in the painful truths surrounding the death of their own son. When their lives are threatened, Juul is prepared to risk everything to uncover a sinister maze of secrets that ultimately leads to the dark heart of European history. 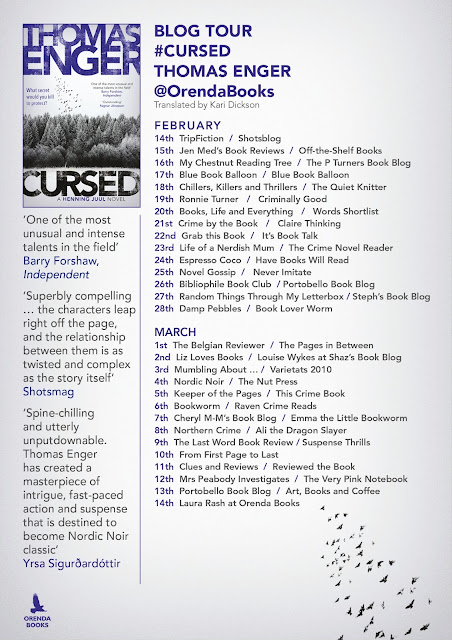