Desperation Road - Where to begin by Michael Farris Smith

You never really know how the next novel is going to begin, but for me and Desperation Road, it began with the simple and hurtful image of a woman and child walking along the side of the road on a scorching Mississippi summer day, with the woman dragging along a garbage bag filled with all they owned.

I don’t know why this is what stuck with me, but as soon as they were in my imagination, I had no choice but the follow them. And that’s just what I did. I don’t do much planning ahead or plotting, preferring instead to go along with my characters from day to day, to see what they may do, to find out how they may surprise me. Following Maben and Annalee became something I couldn’t turn away from and that is usually a good sign that I have come across the right idea.

So their discovery becomes my discovery, and with the hope that the sense of discovery bleeds over to the reader. I knew they were in for a rough go, quite simply because they were already in a tough situation. No money, no one to help, nowhere to go, no answers. I like beginning my novels with the feet already held over the fire. But their desperation is what drives Maben to make the decision she makes, that gets them into an even tougher spot, and so forth and so on. I like it when things are hard on my characters, because once I begin to wonder how I’m going to get them out of a certain situation, I feel like I’m doing my job. If I’m wondering, then the reader is likely doing the same thing.

Maben doesn’t always makes the right decisions. And neither does Russell, who shows up a little later. By the time they cross paths, they both have come to realize that even though you haven’t done the right things in the past, it’s never too late to start trying. No matter how desperate the road had become. 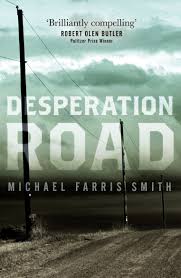 Desperation Road by Michael Farris Smith is published on 23rd February 2017 and is published by No Exit Press.

For eleven years the clock has been ticking for Russell Gaines as he sat in Parchman penitentiary in the Mississippi Delta. His time now up, and believing his debt paid, he returns home only to discover that revenge lives and breathes all around.  On the day of his release, a woman named Maben and her young daughter trudge along the side of the interstate under the punishing summer sun. Desperate and exhausted, the pair spend their last dollar on a motel room for the night, a night that ends with Maben running through the darkness holding a pistol, and a dead deputy sprawled across the road in the glow of his own headlights. With dawn, destinies collide, and Russell is forced to decide whose life he will save his own or that of the woman and child?