James Hilton - Write what you know or don’t.

One of the first nuggets of advice given to any fledgling writer is write about what you know. I remember reading and ingesting that advice and then staring nonplussed out of my window for a long time. I was probably about sixteen at the time. 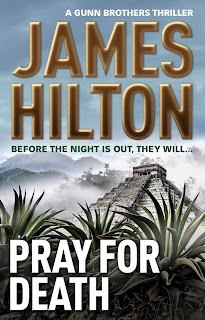 “What do I know?” That question rattled around in my adolescent mind like a marble in a gerbil run. I knew a bit about martial arts (quite a lot really for a skinny kid who could hardly afford to pay for karate lessons), a hodgepodge of mythological facts and folk stories passed down from my father and not a whole lot more.
Or so I thought. I was always a bookworm and was often to be found in a quiet corner with a gritty thriller or horror novel in my hand. I read whatever was on my father’s shelf. A lot of those books were cheap paperbacks with characters like Edge, James Bond, Adam Steele, Remo Williams, Nick Carter and Conan the Barbarian.
As I got older and my writing began to take a more structured form I began to realise just how much these red-blooded tales had stuck with me. I grew up on a very working-class council estate in Carlisle in the north west of England. As one of five siblings, I was blessed in having my brothers around at all times. This also provided a constant source of debate on our favourite characters from comics, films and books.
When I reflect on my influences, themes and characters that I now explore in my own novels, I am hardly surprised to find the fiercely loyal family bond shown between my Gunn Brothers. The age-old themes too of honour, courage under fire and iron will are key themes within my stories. Ordinary people can do some extraordinary acts when called upon. This goes far beyond bullets and bar room brawls. Stubborn acts of defiance, when the odds are stacked so high that it’s just not funny, are what define us. It’s not what happens to you but how you deal with it that makes the common man or woman a hero. Every week in the news people show that they can exhibit levels of compassion, charity, friendship and bravery that take our breath.
Write what you know.
Does that mean if you work in a bank, office or supermarket, you have to set your stories there? Not if you don’t want to. Not by any stretch of the imagination. You may know those industries inside out, but you know far more than that. What about the characters? Staff, co-workers, customers and clients? That guy who wears an old-style fedora hat. That lady who walks a dog bigger than she is. The guy in your bar with no left hand. Characters in our play of life. Observe them. They can often surprise you.
I once moved seats at a bar on vacation to let a little guy sit down. He was about five foot two and looked to weigh about ten stone wet through. It turned out that he had just returned from Afghanistan and had been working only two days prior as a tunnel rat, clearing out cave systems of enemy combatants. He looked like a live action Ned Flanders and was a gentleman in his manners when ladies were in earshot. People can surprise you.
Write what you know. You probably know about friendship, loyalty, love, loss, worry and family. It is up to you how you mix those potent ingredients together. Will you write a family drama? Comedy? Thriller? A romance or an erotic tale? Life is what it’s all about. Living life is what life is all about.
The fictional lives we create can be greater that their sum parts. That’s one of the many joys of writing. Will you allow your characters redemption? Escape? Reward? Or will they suffer a darker fate, and conflict.
People, emotions, conflict. Love, conflict and redemption.
Write what you know. (And just make the rest up…it works for me.)

Pray for Death by James Hilton (Titan Books)
Celine Chavez is the closest thing to a daughter that Clay Gunn has. But now she has disappeared while vacationing in Mexico. Clay and his brother Danny must venture into the violent world of the Mexican criminal underworld to bring her home. From the bright lights of Cancun to a living nightmare in the jungles of the Yucatan, the brothers face the direst of enemies yet. One thing is for sure: if they survive, the Gunn brothers will never be the same again.
Posted by Ayo Onatade at 06:00