Manda Scott Revealed to be the Winner of the McIlvanney Prize Scottish Crime Book of the Year Award 2019.

David Baldacci announced at the opening of Bloody Scotland that the winner of the 2019 McIlvanney Prize is Manda Scott for A Treachery of Spies published by Transworld. 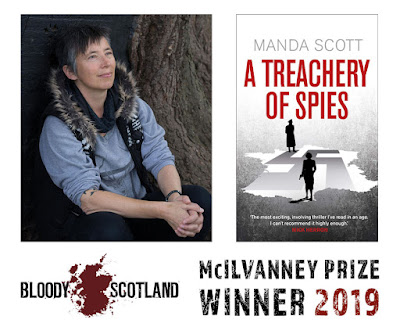 It is only the second time in its 8-year history that the prize has been won by a woman. Two previous winners – Denise Mina and Chris Brookmyre (this time as Ambrose Parry with wife Marisa Haetzman) were amongst the four finalists along with Doug Johnstone – but A Treachery of Spies was the unanimous winner.

The panel of judges which included Guardian journalist Alison Flood; Chair of Publishing Scotland, James Crawford and former Head of Programmes at Channel 4, Stuart Cosgrove, described A Treachery of Spies as: ‘A powerful, complex and remarkable espionage thriller: a present-day murder links back to Resistance France.  An intricately plotted novel which keeps the reader guessing right to the end.’

Born and raised in Scotland, Manda has been, variously a veterinary surgeon, veterinary anaesthetist, acupuncturist columnist, blogger, economist – and author. She began her writing career with a series of crime novels, the first of which was shortlisted for the Orange Prize. No Good Deed, the dark, edgy thriller which followed, was nominated for an Edgar Award and hailed as one of the most remarkable thrillers of the year in 2001.

The McIlvanney Prize recognises excellence in Scottish crime writing, includes a prize of £1000 and nationwide promotion in Waterstones. 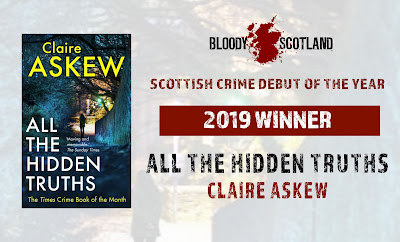 This year Bloody Scotland also introduced the inaugural Bloody Scotland Scottish Crime Debut of the Year and special guest, Richard Osman, presenter of Pointless on TV and soon to be a debut author himself, presented it to Claire Askew for All the Hidden Truths published by Hodder. She is a poet, novelist and the current Writer in Residence at the University of Edinburgh.

Both winners accompanied David Baldacci at the head of the torchlit procession from Stirling Castle to his event at the Albert Halls which begins at 8.30pm.

Festival Director, Bob McDevitt commented:
‘I am delighted that a woman has won both the McIlvanney Prize and the Debut Prize. Coincidentally we had already planned a panel on Spy Sisters about how women are beginning to enter the male dominated preserve of spy fiction. When Manda was longlisted for the prize we added her to the panel. Now anyone who had booked to see that event at 2.30pm tomorrow will be lucky to hear from the McIlvanney Prize winner.’

Manda Scott was born in Glasgow but now lives in Ludlow, Shropshire. She will be in Stirling until Monday afternoon. If you would like to talk to either of the winners, the judges or the Director of Bloody Scotland Bob McDevitt please contact fiona@brownleedonald.com 07767 431846. 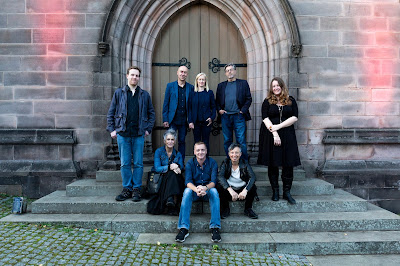 Immediately after being presented the McIlvanney Prize 2019 by David Baldacci, Manda Scott announced that she wished to share the prize equally with all finalists - Doug Johnstone, Denise Mina and Ambrose Parry (Chris Brookmyre & Marisa Haetzman.

She invited them all to join her on stage on this day of climate protest and said 'This is the proudest moment of my life. We need to change if we're going to get through this moment of climate and ecological crisis and we need to change the way we do things - this starts with abandoning rivalry. We need to cooperate. We need to share. I would like this to be a grain of sand in a tide that sweeps us to a new way of being.


Manda and the other winners went on to lead the torchlight procession with David Baldacci.
Posted by Ayo Onatade at 19:51