A trio of fresh crime voices were the culprits in Christchurch on Saturday evening as Dame Fiona Kidman, JP Pomare, and Kelly Dennett were unmasked as winners of the 2019 Ngaio Marsh Awards.

“Despite the historical nature of the novel, the spirit still resonates in our time with regards to bigotry and discrimination,” said the judges. “The quality of the writing is extraordinary: a richly textured sense of 1950s New Zealand and an elegant structure and flow creating a harrowing tale full of humanity.”

This Mortal Boy becomes the first novel to win both the Ngaio Marsh Award and the Acorn Prize for Fiction. The book has also won Dame Fiona the NZ Booklovers Award and NZSA Heritage Book Award.

JP Pomare grew up on a horse farm outside of Rotorua, surfed the Bay of Plenty coastline, and now lives in Melbourne. He won the 2019 Ngaio Marsh Award for Best First Novel for Call Me Evie (Hachette), a mind-bending psychological thriller about Melbourne teenager Kate who is recovering from a traumatic incident in a remote cabin in Maketu. But is the man with her a carer or a captor?  “An interesting take on unreliable narrators” said the Judges.  “Evocative and elegant writing. An intricate story packed with suspense and a fascinating exploration of the concept of false memory.”

Journalist Kelly Dennett won the Best Non-Fiction prize for her superb exploration of one of New Zealand’s most infamous unsolved cases in The Short Life and Mysterious Death of Jane Furlong (Awa Press). Dennett’s first book takes readers behind the lurid headlines as it explores Jane’s broader life, the impact of her disappearance on those who loved her, and the on-going mystery.

“A tragic story approached with sincerely and compassion” said the judges. “There was a sense of understated rage at the injustice of it all. Dennett has, with compassion and respect, shown us the young woman who was so much more than a ‘teen prostitute’ who went missing from K Road”.  “It’s a little surreal to realise this is now the tenth season of the Ngaio Marsh Awards,” said founder Craig Sisterson. “We’ve been blessed to have some extraordinary books to consider and celebrate over the past decade, and this year has further added to the growing depth and diversity of local crime writing.”

Dame Fiona received a trophy, special edition of a Dame Ngaio book, and $1,000 courtesy of WORD Christchurch. Pomare and Dennett won a trophy, book, and cash prize from the Ngaio Marsh Awards.

“Decades ago, a remarkable woman from Christchurch was renowned globally as one of the biggest names throughout the storytelling world” said Sisterson.  “So it is only fitting that awards in Dam Ngaio’s name are now showcasing just how world-class many of our modern day Kiwi writers are too.” 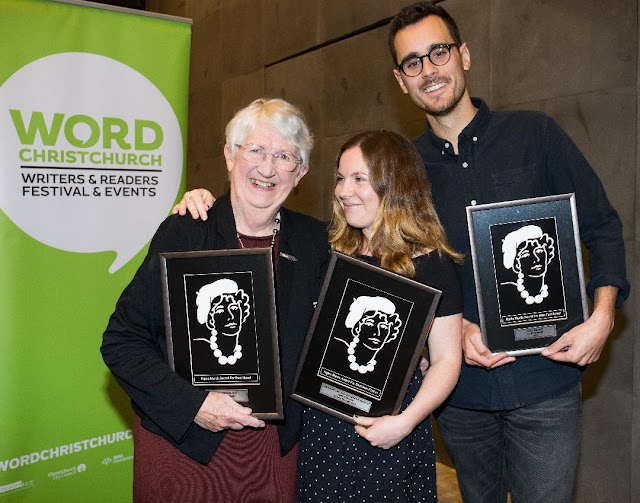 You can also now listen to a radio interview with the three winners, who are all absolutely chuffed, here:

For more information about the Ngaio Marsh Awards, contact the Judging Convenor: craigsisterson@hotmail.com or ngaiomarshaward@gmail.com.