Crime Writers of Canada have announced the Winners of the 2020 Arthur Ellis Awards. Congratulations to all! 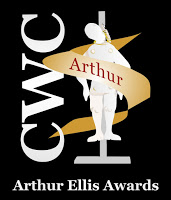 The Best Crime First Novel sponsored by Maureen Jennings with a $500 prize , Nobody Move by Philip Elliott (Into the Void Press)

Best Nonfiction Book
Murdered Midas: A Millionaire, His Gold Mine, and a Strange Death on an Island Paradise by Charlotte Gray (HarperCollins)

The complete shortlist can be found here.
Posted by Ayo Onatade at 07:00