John Lawton on What Sparked The Storyline

In which I persuade John Lawton to reveal what was the idea that sparked the storyline.

Ayo — that’s a difficult question but only a literary gonif would refuse to attempt an answer.

I have always known where my Troy character came from.

Firstly a job tending an orange grove in Spain about forty years ago — there were not many English language books around, but one of them was Martin Cruz Smith’s Gorky Park (1981). Still unbeatable, my favourite detective story bar none. It led to a rush of Russia-set thrillers … but I wasn’t tempted. I needed an elliptical relationship to Gorky Park not a slavishly literal one.

Secondly, seeking to avoid an Eng Lit degree that might have left me drowning in Jane Austen. Marooned in a BBC costume drama, the like of which I cannot watch — ‘La, Mr D’Oily, the foxhound just farted’ — I signed up for the only undergraduate course in the UK in ‘American Literature’. Tennessee, Twain, Vonnegut, Vidal … Myra Breckinridge not Emma Woodhouse! … alas this was the sixties — the home decade of ‘bad’ behaviour. I got slung out. ‘Slung out’ is posh for rusticated.

By the time I had worked my psych ticket (Thank you, Corporal Klinger) all the courses had changed and rather than revert to the drawing room and the farting hounds I opted for pre-Soviet Russian Lit, with a year’s Russian language thrown in for good measure. And I emerged steeped in axe-wielding Russian maniacs sometime in the seventies. I’m not wholly sure what the seventies were — I was looking the other way when they happened.

Out of this unholy combination — Russia X 2 — came Frederick Troy.

I am not a Londoner. I’m not even a southerner. London was a place I passed though without stopping. But, ’round about 1980 I was teaching in a London University college — ‘Othello and the Incredible Hulk’ and ‘Robert Browning at the Hotel California’ being my most notable lectures. You may imagine I did not last long … but I lived in Stepney. In 1980 Stepney was old London, ungentrified. The Indian settling of Brick Lane was under way, but the presence and influence of the previous wave of immigrants could still be felt — the Jews. I found the East End, the descendants of the pogrommed refugees, fascinating. I could walk into my local pub and overhear conversations in Yiddish. Also, the presence of the East End’s most notorious villains could still be felt. The Krays had been in prison about ten years at this point.

Sooner or later a Stepney kid was going to surface as the central character in a novel. That became Joe Wilderness — of no particular ethnicity, but born to a family of thieves, rogues and hookers. I housed him in what is probably the East End’s most famous street, Sidney Street, where a young(ish) Winston Churchill personally supervised an armed raid on a bunch of Russian anarchists circa 1910, and where Peter the Painter met his end, or not … depending in which version you believe.

The plot matter was ‘how to get Joe out of Sidney Street?’

I could not leave him there. I had no wish to write an East End gangster novel — quite enough of those around as it is.

Russia came to my aid once more.

Sgt.Maj Loudbutthick: “Right, you useless fuckers! You can spend the next six months square-bashin’ or you can go to Cambridge and learn Russian! Nah, wossit gonna be?”

Some choice … so they both became ‘spies’ … monitoring Russian broadcasting and communiqués.

That was Joe’s route out of the East End, my storyline — or perhaps that should be plural — a highly intelligent Cockney drafted into the RAF (the only branch of UK Armed Forces that had an IQ test for draftees), who becomes fluent in Russian, a valuable asset to MI6 … but … but inside he remains the East End rogue of his youth …. a thoroughly likeable, deeply dishonest spook who cannot get by without ‘something on the side.’

Two of my tutors in Russian Government, being too young for WW2 had been drafted into the RAF about the time of the Korean War.

My first Wilderness novel, Then We Take Berlin, sees him as a smuggler of coffee, as valuable a commodity as cigarettes in the late 1940s, from West Berlin to East Berlin. But, as a reviewer helpfully pointed out (I had not noticed) Joe never really profits, money runs though his fingers like grains of sand.

In the second, The Unfortunate Englishman, it is truckload of vintage Claret.

And in my current novel, Hammer to Fall, illegally-distilled Finnish vodka, which he smuggles into a thirsty Soviet Union, via a ‘hole-in-the-fence’ in Murmansk.

Every time I write a novel, it is an end in itself. Reviewers said of Then We Take Berlin ‘weird ending. He must be planning a sequel.’ I wasn’t. That really was where Wilderness ended.

Then, the home team … agents, publishers, girlfriends, say … ‘Well would it kill you to write a sequel?’

And The Unfortunate Englishman was also the last of Wilderness. One of the few happy endings I have ever written. (‘Happiness is for losers.’ F. Nietzsche 1897).

And … I was not at all sure I could write a third Wilderness. Could he not just stay happy in Hampstead with his wife and daughters?

No, he bloody well couldn’t.

For one thing I had started isolating myself to write at the bottom of a deep valley in Southern Tuscany — a fourteenth century watermill, surrounded in mist, bollock-freezing cold and beautiful.

One of the neighbours — well, not that isolated after all — is the Finnish musician Anna-Riikka Santapukki. So, I learnt something of Finland just in the course of conversation, and pursued it in research, in particular its struggle to stay neutral during the Cold War and its thousand-mile, heavily-defended frontier with the USSR — not a country anyone would choose as a neighbour. And I learnt that in an effort to remain neutral it had, sometime in the early sixties, both kicked out the CIA and denied Russia use of military bases. This country, population under five million, had balls, and in the absence of the CIA I saw a role and a plot for Joe Wilderness. And, of course, Finland distils hooch in greater quantities than the backwoods of Kentucky. ’Nuff said.

I could not and did not leave Joe in Finland. The needs of plot called for more action … and a the next ‘big thing’ in the Cold War loomed ominous and obvious — the Warsaw Pact invasion of Czechoslovakia in August 1968.

Any more would be what I believe is termed a ‘spoiler.’ 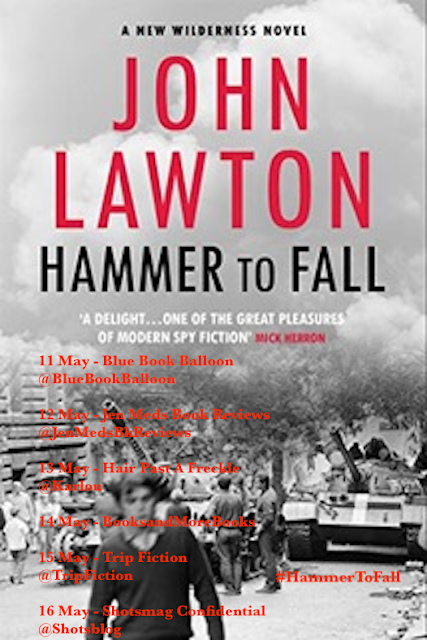 Hammer To Fall by John Lawton (Published by Grove Press)
It's London, the swinging sixties, and by rights MI6 spy Joe Wilderness should be having as good a time as James Bond. But alas, in the wake of an embarrassing disaster for MI6, Wilderness has been posted to remote northern Finland in a cultural exchange program to promote Britain abroad. Bored by his work, with nothing to spy on, Wilderness finds another way to make money: smuggling vodka across the border into the USSR. He strikes a deal with old KGB pal Kostya, who explains to him there is a vodka shortage in the Soviet Union - but there is something fishy about Kostya's sudden appearance in Finland and intelligence from London points to a connection to cobalt mining in the region, a critical component in the casing of an atomic bomb. Wilderness's posting is getting more interesting by the minute, but more dangerous too. Moving from the no-man's-land of Cold War Finland to the wild days of the Prague Spring, and populated by old friends (including Inspector Troy) and old enemies alike, Hammer to Fall is a gripping tale of deception and skulduggery, of art and politics, a page-turning story of the always riveting life of the British spy.