Bosch on the Bayou at Bouchercon 2021 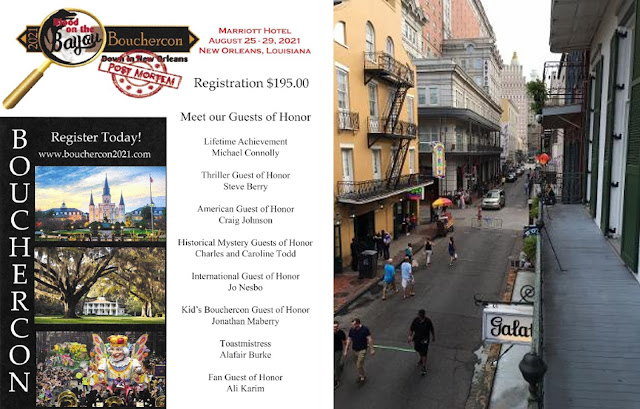 To keep our spirits up during this surreal period of COVID-19 confinement - one must plan for when we can next see our friends, colleagues and fellow advocates of the Crime and Mystery Fiction Genre.

Sadly, many 2020 crime, mystery and thriller fiction events have been cancelled in the wake of this RNA-Virus - such as Bouchercon 2020 [Sacramento, USA], Theakstons’ Crime Writing Festival 2020 [Harrogate, UK], Crimefest 2020 [Bristol, England] to name a few.

We’re waiting to see if Adam Hamdy, David Headley and Liz Curle’s Capital Crime 2020 [London, England] will occur, as it is after the summer and we pray that we will have the COVID-19 situation under control by then.

Thriller writer KJ Howe, with ITW’s technical bloke Jeff Ayers, and the team behind International Thriller Writers Inc, have come up with a good plan, following the cancellation of New York’s Thrillerfest 2020 [due to fears of COVID-19] – so the ITW gang have a planned Virtual event, details HERE

We got word from the Bouchercon Board of Directors, that it’s all steam ahead for Bouchercon 2021 [New Orleans, USA]; and that the work of Michael Connelly is to be celebrated as he will receive the lifetime achievement award for his writing.

We are delighted that former journalist Michael Connelly and his novels, stories [many featuring that singular creation Harry Bosch] and film / TV is to be celebrated during Bouchercon 2021.

In 2018, the Crime Writers Association recognised a lifetime achievement award in London, when he was presented with the CWA Diamond Dagger.

For many readers (myself included), Michael Connelly is one of the greatest living crime writers working today, and for many - his creation Harry Bosch of the LAPD is one of fiction’s greatest detectives. And now Amazon Prime’s BOSCH series reaches its sixth season, with Titus Welliver playing the eponymous Investigator. All seasons of Bosch are available to stream online at Amazon Prime. 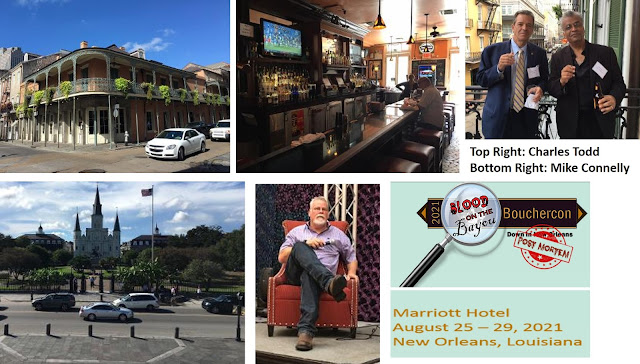 Literary commentator / critic, horticulturist and sports presenter Michael Carlson published an excellent feature for Shots Magazine THE ABSTRACT ART OF BOSCH, which can be accessed HERE

And if you are readying yourself to watch Bosch Season Six, remember part of the narrative arc comes from Michael Connelly’s THE OVERLOOK. It was originally a story serialised in the New York Times, but eventually found itself as a novel – I spoke with Michael at the time about this lean and extraordinary post-911 narrative [one that features Larry Gandle as Bosch’s Boss] – it is archived HERE

Joining Michael Connelly, as Guests of Bouchercon 2021, are :-

And for some reason, I’m also excited to attend.

Much thanks must go to the Dynamic Duo, of best-selling thriller writer Heather Graham and the extraordinary Connie Perry [and their team], for chairing the event, and returning us back to New Orleans after the extraordinary event in 2016.

And Jeff Pierce at the Rap Sheet has commentary and pictures HERE and remember 2021’s Bouchercon is a return trip for Mike Connelly to New Orleans, as he was interviewed by Harlan Coben – Archived video HERE 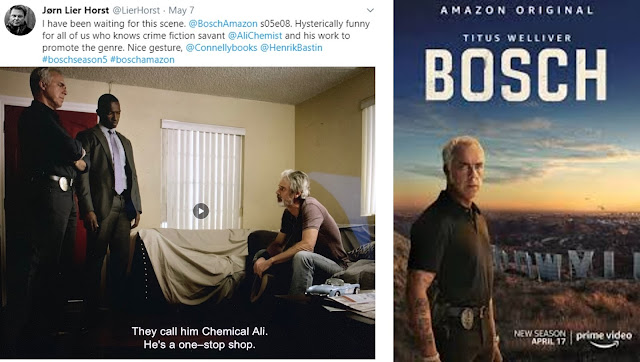 So as the crime, mystery and thriller clan gather, after so long, I’d start planning for Bouchercon 2021: Blood on the Bayou

Hope to see you at the biggest celebration of Crime and Mystery Fiction, Bouchercon 2021 and I’d register as soon as possible as registrations are coming in thick and fast. 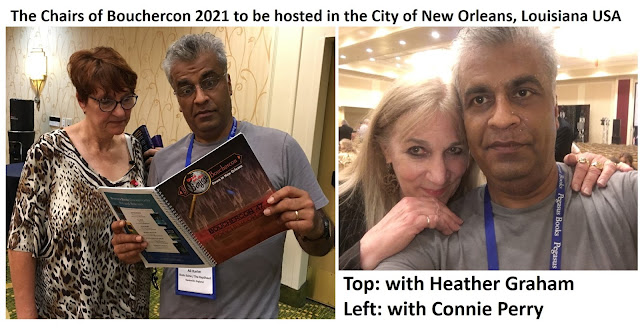 AND STAY WELL / TAKE PRECAUTIONS AND READ BOOKS TO ESCAPE