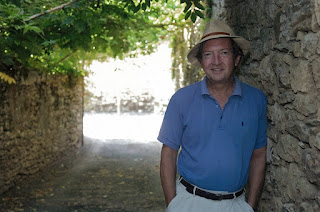 This novel began to take shape in my head in late 2017 when a Maltese journalist, Daphne Caruana Galizia, was assassinated by a car bomb when she began to expose the corruption involved in the sale of Maltese passports to Russian oligarchs and other dubious types. It was not as simple as paying cash. To get Maltese, and thus European citizenship, proof of residence was required. So broom cupboards described as luxury studio apartments were rented for large sums from well-connected Maltese and the passport followed.

Similar scams were under way in Cyprus and across Europe new insurance and finance agencies and property groups began to mushroom, as funds from Russia and other dodgy sources was whitewashed clean. Then in March, 2018, Russian agents used nerve poison in the placid cathedral town of Salisbury to murder a defector and it was clear the Europe security services had a big problem. They had turned a blind eye to the swift little war the Russians had waged on the formerly Soviet Republic of Georgia, and to the Kremlin’s annexation of Crimea. But they could hardly ignore the invasion of Ukraine and the shooting down of civilian airliners with Russian missiles.

What would they do about it? Could they try using the money as leverage on those oligarchs who were close to Putin. And where had Putin stashed his own wealth? Who would know, if not one of more of these Kremlin oligarchs?

And how would this come to disturb the Perigord, the charming gastronomic heartland of France with its foie gras and black truffles? Could the new Kremlin games play out among the medieval castles and Renaissance chateaus of the Perigord, its prehistoric cave paintings and its famous village markets?

What if one of those chateaus were on sale, perhaps by an aging British rocker whose much younger wife wanted a divorce? But they decide on a last family summer at the chateau with their grown-up children. The son, Jamie, is studying classical music and brings a bunch of classmates down to play at the endless local concerts and music festivals. The daughter wants to go into the wine business. And since they grew up in St Denis, they were taught to play tennis by the local policeman, Bruno, who is delighted to see them back in the district.

At the same time, a shady insurance group is offering pensioners a very comfortable old age in a luxury retirement home, in return for making over all their property and other assets. When an old local sheep farmer, who has signed up for this deal dies before he can move into the luxury chateau, Bruno starts to investigate and is outraged when he finds the insurers had neglected to do anything about the hundreds of sheep and lambs abandoned at the farm. He starts probing and probing and suddenly finds himself on the trail of a wealthy Russian oligarch who had been in the same Leningrad judo club as Putin when they were boys. The two stories of rock star and Russians start to come together.

For Bruno, there is something eerily familiar here. When he was in the French Army, he was seconded to the UN peacekeepers in Bosnia in what future historians will probably call the First War of the Soviet Succession. In the Balkans, Central Asia, the Caucasus and the Ukraine, we have seen battles and wars over the question - who rules after the collapse of the USSR? Putin has said that the Soviet collapse was “a geopolitical disaster.’ He seems to want to restore Russia to that Soviet influence and status, even though his economy depends on fossil fuels whose importance is dwindling fast.

Bruno starts to realise he is caught up in a huge geo-political drama. In the meantime Bruno is riding his horse, Hector, teaching Florence's kids how to swim, learning to cook for vegetarian guests, exploring Japanese food and trying to arrange a comeback concert in St Denis for the old British rock musician. And, of course, he is still making the usual mess of his romantic life. But now comes something new.

I break my long-standing rule not to write explicit love scenes. Bruno and his partners deserve their privacy and I'd be far too embarrassed at the thought of my daughters reading them. But fear not, no humans are involved in the new sex scene; it is simply time for Balzac the basset hound to become a father. Naturally, he requires the help of a fetching young female hound named Diane de Poitiers, who is named after a famous mistress of a French king. Nothing but the best for Balzac!

A Shooting at Chateau Rock by Martin Walker (Quercus Publishing) 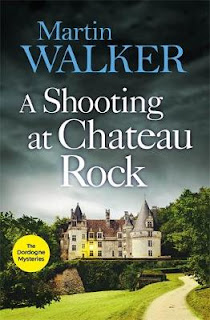 Following the funeral of a local farmer, Bruno gets a phone call from his son. He tells Bruno that before his father's sudden death, he had signed over his property to an insurance company in return for a subscription to a luxury retirement home. Bruno discovers that both the retirement home and the insurance company are scams with links to a Russian oligarch whose dealings are already being tracked by the French police. Meanwhile an aging British rock star is selling his home, Chateau Rock. The star's son returns for the summer with his Russian girlfriend. As Bruno pursues his inquiries into the farmer's death and the stolen inheritance, he learns that the oligarch is none other than the girlfriend's father. Bruno's talents are tested to the limit as he untangles a Gordian Knot of criminality that reaches as far as the Kremlin. But luckily Bruno still has time to cook delicious meals for his friends and enjoy the life of his beloved Dordogne. What's more, love is in the air. His pedigree basset, Balzac, is old enough to breed. Bruno heads for the kennels where a suitable beauty, Diane de Poitiers, is ready and waiting for Balzac's attentions...

More info about the author and his books can be found on his  Bruno Chief of Police website.