Desmond Bagley Memoir – Writer: An Enquiry into a Novelist 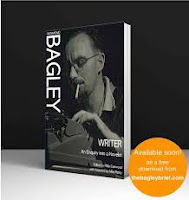 Fans of thriller writer Desmond Bagley will be pleased to know that his previously unpublished memoir Writer: An Enquiry into a Novelist is due to be available for free download from The Bagley Brief website from 1 March 2021.

Shots and GAWM monthly author Mike Ripley wrote the foreword which can be read below.

It is widely accepted that there was a ‘Golden Age’ of English crime fiction in the 1920s and 1930s, centred very much on the detective story which set a puzzle, usually a ‘whodunit?’ but sometimes a ‘howdunit?’ or even a ‘whydunit?’. Famous fictional detectives were created, among them Hercule Poirot, Lord Peter Wimsey, Father Brown and Miss Marple, all familiar names to this day, yet even in the ‘Golden Age’, their adventures in print were eclipsed by the popularity of thrillers.

However much the Golden Age authors of detective stories are revered – and they certainly should be – the fact is that at the time, they were outsold by thriller writers such as John Buchan, ‘Sapper’, Leslie Charteris, Edgar Wallace and many others long forgotten. The thriller writer was not so much interested in who had done the crime (invariably murder) but in putting his characters in jeopardy and then posing the question ‘how do they get out of this?’

But if there was a Golden Age of the British thriller, and there was, it ran from 1953 (the first James Bond book) until around 1976. In that period, British authors of adventure thrillers, and then spy stories, dominated best-seller lists internationally and the ‘big three’ were Hammond Innes, Alistair MacLean and Desmond Bagley.

The triumvirate of Innes, MacLean and Bagley had much in common, not the least being the same publisher, William Collins (now HarperCollins). Innes’ thriller writing career began during World War II and many of his adventure stories were turned into successful films in the 1950s, the books on which they were based outselling the spy fantasies of Ian Fleming, much to Fleming’s annoyance. By 1958, Innes’ sales had been overtaken by those of relative newcomer Alistair MacLean, with a trio of thrillers set during the war, written as high adventure, but both authors benefitted from large runs of paperback editions.

It was no wonder that Desmond Bagley approached Collins with his first novel The Golden Keel, supposedly introducing himself as someone who ‘wrote stories like Alistair MacLean’ and indeed a review of that debut in the Sunday Times claimed that ‘it catapults him straight into the Alistair MacLean bracket’.

In truth, Bagley’s novels had more in common with those of Hammond Innes than MacLean, a fact ironically acknowledged early on in The Golden Keel when a character says ‘(this sounds like something) from a Hammond Innes thriller.’ But all three shared one important life experience: they had travelled widely at a time when foreign holidays for most of their readers were still only an aspiration.

Both Bagley and Innes were inveterate travellers and MacLean had seen wartime service in the navy in the Arctic, the Mediterranean and the Far East. Their experience of exotic, foreign locations soaked into their writing and became a key factor in their success. Not surprisingly, few of their stories took place on mainland UK with Bagley’s fictional Atlas eventually covering the High Andes, Yucatan, the Bahamas, British Columbia, the Sahara, Scandinavia and, perhaps most famously of all, Iceland. Reading a Desmond Bagley, who could describe the topography, climate and natural hazards of far-away lands in beguilingly simple prose, was like going on an expedition without leaving one’s favourite armchair.

And in a Desmond Bagley novel, that expedition would always be in the company of ordinary, believable characters who would come through whatever was thrown at them by nature or by villains, by resourcefulness and pluck, not super-human powers or gadgets. In this, Bagley was following in a long tradition of popular writers such as Robert Louis Stevenson and Nevil Shute

One other thing Bagley had in common with Innes and MacLean was sex, or rather the lack of it. Female characters do, of course, feature in the novels of all three but sex – unusually for the ‘Swinging Sixties’ – never raised its ugly head. Its absence gave Bagley’s work something of an air of innocence and certainly did not affect his sales one jot.

It may also explain one other thing. I have no empirical evidence other than conversations with hundreds of thriller readers and writers over the years, but I am convinced that Desmond Bagley was as popular with female readers as he was with adventure-seeking red-blooded males. For proof, I can only offer a snippet from a newspaper interview given by Bagley in 1980 when he told a journalist; ‘In Lahore there’s even a Desmond Bagley fan club of about 400 teenage girls. What on Earth they do, I haven’t the faintest idea.’

They read your books, Desmond, and they enjoy them. They probably still do.

This memoir, painstakingly and lovingly reconstructed, gives a rare glimpse into the early life and formative influences of a very successful author and a man about whom few had a bad word to say. As a writer and as a reader of his novels from thew age of 13, I was both fascinated by it and grateful for it.

More information about Desmond Bagley and his work can be found in Mike Ripley's book: Kiss Kiss, Bang Bang: The Boom in British Thrillers from Casino Royale to The Eagle Has Landed (HarperCollins)