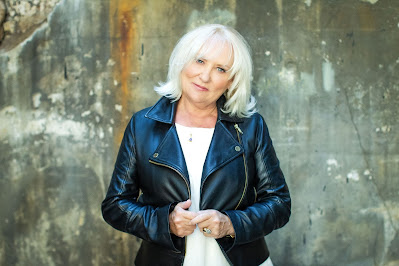 Martina Cole is the recipient of the highest honour in British crime writing, the Crime Writers’ Association (CWA) Diamond Dagger.

The long-reigning Queen of Crime Drama is a publishing powerhouse. Martina has written 25 novels, all published by Headline, seventeen of which reached No.1 and her books have collectively spent over 4 years in the bestseller charts. Total sales stand at over 17 million copies, making her Britain’s bestselling female crime writer and with The Faithless she became the first British female adult audience novelist to break the £50 million sales mark since Nielsen Bookscan records began. Her books have been translated into 31 languages and adapted for multiple stage plays and television series.

Martina’s own story is as remarkable as any bestseller plot. Martina grew up on an Essex council estate and Ronnie and Reggie Kray once visited her family’s home when she was a child.

The youngest of five children in a large, poor, Irish Catholic family, she attended a convent school, where her struggle against authority started; this culminated in two expulsions. She finished school at 15 with no qualifications; was married at 16, divorced at 17 and pregnant at 18. A single mum, she struggled to bring up her son, Chris, taking on waitressing jobs.

Aged 21, she lost both her parents and started to write her iconic debut novel, Dangerous Lady, but it wasn’t until she was 30 that she gave up her job and decided to devote herself seriously to writing and finished the manuscript. Dangerous Lady caused a sensation when it was published in 1992 – and the rest is history.

Martina is a passionate advocate for prisoner rehabilitation and visits prisons to give writing classes. She often quips to her classes: ‘there’s one thing you’ve got that all writers want – time’. It’s therefore no surprise her books are the most requested in Her Majesty’s prison libraries, and the most stolen from bookshops.

The Diamond Dagger award recognises authors whose crime-writing careers have been marked by sustained excellence, and who have made a significant contribution to crime fiction writing.

Martina said: “It means so much to me to be receiving this prestigious award from my peers at the CWA. I can’t believe it’s nearly thirty years since Dangerous Lady was published - some people dismissed me as an Essex girl and a one-book wonder – but as one of my favourite songs goes: ‘I’m still here’!”

Linda Stratmann, Chair of the CWA, said: “We are delighted to award the Diamond Dagger to a crime-writing legend.”

Maxim Jakubowski, Hon CWA Vice Chair, said: “A much-overdue reward for a major crime author who has often been badly overlooked by the critical establishment. Martina has single-handedly created a new crime genre and brought so many new readers on board, and has always been a vocal supporter of her fellow writers in word and deed.”