A Q & A with David Fennell 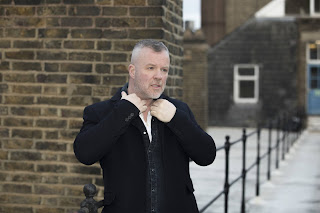 Ayo:- The Art of Death is your first foray into adult fiction as you have written a number of Young Adult books. What made you decide to leave YA behind and write a police procedural featuring a serial killer and will you ever go back to writing YA books?

David:- Good question. I had written crime before I started writing YA, however, I hadn’t quite found my feet there and abandoned what I was working on. SLEEPER is my first published novel, a YA historical urban fantasy story, which I never thought would ever get picked up. The sequel is set two years later, when the protagonists are entering adulthood, and there is a recent published short story set ten years on from that. I’m proud of the SLEEPER series. They cross genres and follow the lives of the protagonists from the age sixteen through to adulthood. Both novels were shortlisted for awards, including the Wilbur Smith Prize, but neither sold very well. That said, I’m not ready to leave that world just yet and will revisit it one day. To answer the first part of your question, returning to crime was always on the cards. I was waiting for the right time and the right concept, and so THE ART OF DEATH was born.

Ayo:- Who or what was the inspiration for The Art of Death?

David:- Two inspirations: My partner, David, and a 1972 Spanish horror film called La Cabina. If you’ve seen the movie and read THE ART OF DEATH, you will understand what I mean.

Ayo:- How did you go about doing your research for The Art of Death?

David:- The main areas for research were around policing, forensics and murder. I read a lot of books, manuals and articles related to these subjects whilst being mindful that this book should not be bogged down with technical jargon or police protocol. Character and story are, and remain, my key focus. I write books to entertain people and perhaps terrify them too.

Ayo:- How do you write? Do you prefer writing in silence or do you have music on in the background? If you do have music on what type of music does it tend to be?

David:- I do listen to music and this is always movie soundtracks or classical. I can’t have words singing in my ears. Too distracting, plus I’ll sing along and get nowhere with my writing.

Ayo:- The Art of Death is about a serial killer have you any favourite fictional serial killers? If so who are they and why?

David:- This question made me smile and raised an eyebrow. I’m picturing a dreamy poster of a serial murderer on my office wall, which is weird, but funny. I’m not a fan boy of serial killers, for obvious reasons. I have a favourite series, which is Thomas Harris’ Hannibal Lecter books, so I suppose Lecter is my poster boy.

Ayo:- Did you have any intention of writing a series?

David:- Yes. I’m motivated to expand the imaginary world and the characters within it. That is one advantage of writing a series.

Ayo:- What made you decide to write most of it from Grace's point of view?

David:- I’ve always enjoyed reading and watching female leads triumph over adversity in environments that men think they control. Also, a female detective was the right fit for this novel. Pitting her against a savvy serial murderer. I couldn’t resist it.

Ayo:- There is different types of art in The Art of Death but mainly Street Art and Contemporary Art. Do you have a preference when it comes to art? Have you a favourite artist

Ayo:- A lot of the book is set in Central London specifically around Covent Garden. Was this deliberate?

David:- It’s an area that I know very well and love too, so yes. I tried to do my best to bring out the cityscape as I see it and wanted the streets to stand out on the page in all their grandeur and decay.

Ayo:- What is the more important for you characterisation or plot or do you try and have a happy medium between the two?

David:- Character will, or should, always drive plot, so character first with an immense focus on as entertaining and gripping a story as I can write.

Ayo:- Do you plot before hand or do you just let the writing flow?

David:- I usually have a plan and know what direction I’m going, however, this always changes. In truth, the reality is my plan is more a collection of ideas.

Ayo:- How would you like your characters to be remembered?

David:- If readers are touched in anyway by my characters and what happens to them, then that is enough for me. I will have succeeded.

Ayo:- How did the lockdown affect your writing?

David:- At first it didn’t. I was use to working from home so there was no impact. Lockdown 3.0 is a different matter. It’s winter, it’s post-Christmas, the weather is cold, the light gloomy, and like everyone else I am trying to stay COVID free and alive. Productivity is at an all-time low.

Ayo:- You have very strong views about cyber security and it does show in The Art of Death. Do you think that more can be done about it.

David:- The killer in The Art of Death uses social media to catfish and capture his victims. This is a subject I really wanted to explore in this book. Our data is out there for anyone to view. Anyone with a Facebook account can find out a lot about a person by viewing their profile. Data privacy is so VERY important right now. Anyone of us who has social media is surrendering some or all of their private information to be harvested and used by firms such as Facebook, who use it to shape the opinions and emotions of the individual and populations. Without sounding like a conspiracy theorist, there is so much more going on with our personal data than we understand. So yes, there is a lot that can be done, but that’s a whole different discussion.

Ayo:- What are you working on at the moment and can you tell us about it

David:- I’m working on the follow up to The Art of Death. I’d love to tell you more about it, but not right now. Next time. 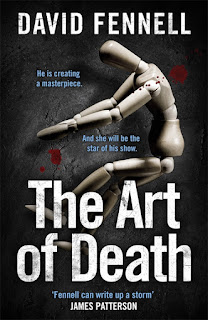 The Art of Death by David Fennell (Published by Bonnier Zaffre)

Death is an art, and he is the master . . . Three glass cabinets appear in London's Trafalgar Square containing a gruesome art installation: the floating corpses of three homeless men. Shock turns to horror when it becomes clear that the bodies are real. The cabinets are traced to @nonymous - an underground artist shrouded in mystery who makes a chilling promise: MORE WILL FOLLOW. Eighteen years ago, Detective Inspector Grace Archer escaped a notorious serial killer. Now, she and her caustic DS, Harry Quinn, must hunt down another. As more bodies appear at London landmarks and murders are livestreamed on social media, their search for @nonymous becomes a desperate race against time. But what Archer doesn't know is that the killer is watching their every move - and he has his sights firmly set on her . . . He is creating a masterpiece. And she will be the star of his show.