Lynda La Plante - Listening to the Dead and The Judas Horse 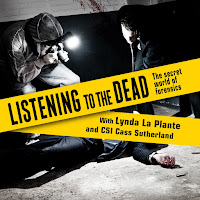 LISTENING TO THE DEAD SEASON 2 PODCAST

Lynda La Plante’s true-crime podcast series, Listening to the Dead, co-hosted by CSI Cass Sutherland, will feature interviews with specialists in the field of criminal science.

The first series, which focussed on forensic science was an Apple Podcast bestseller. The new series, launching on 24th February 2021, will look at how investigators approach different causes of death – from blunt force to poisoning – with a focus on the methods used in the Prime Suspect and Tennison series. The podcast is a contributing factor to the incredible success Lynda La Plante enjoys in audiobook format, with sales of Buried in 2020 55% higher than her previous audio bestseller, Widows, in 2018.

La Plante will also be continuing her Detective Jack Warr series with a new book, Judas Horse, publishing on 1st April 2021. The first in the series, Buried, was published at the very start of the Covid-19 pandemic in April 2020, but despite this became a bestselling sensation, reaching #2 in the Sunday Times bestseller charts in both hardback and paperback, and going on to sell over 100,000 units in the UK and 130,000 units worldwide, making it La Plante’s biggest seller since Bloodline in 2011.

Lynda La Plante said “I am thrilled with all the activity taking place this year, re-packaging, online festivals, my podcast and the new Tennison,Unholy Murder, and Jack Warr novel, Judas Horse. I am also so grateful to the publishers, retailers and especially the readers, who have encouraged and supported me over the years. I’m looking forward to being able to meet and thank them all in person, hopefully in the not too distant future.”

Over 170 hours of international television scripted

CBE since 2008 for services to Literature, Drama and Charity

Lynda La Plante was born in Liverpool. She trained for the stage at RADA and worked with the National theatre and RDC before becoming a television actress. She then turned to writing– and made her breakthrough with the phenomenally successful TV series Widows. Her novels have all been international bestsellers.

Her original script for the much-acclaimed Prime Suspect won awards from BAFTA, Emmy, British Broadcasting and Royal Television Society, as well as the 1993 Edgar Allan Poe Award. Lynda has written and produced over 170 hours of international television.

Lynda is one of only three screenwriters to have been made an honorary fellow of the British Film Institute and was awarded the BAFTA Dennis Potter Best Writer Award in 2000. In 2008, she was awarded a CBE in the Queen's Birthday Honours List for services to Literature, Drama and Charity.

A podcast, a series of novels, the 6th most popular author in the UK and I have never heard of her.

I sometimes wonder if I walk around with my head in a bag...

Thank you for the tip.