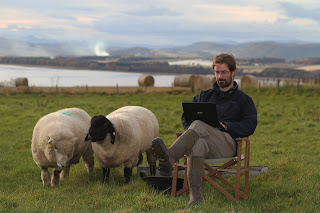 It seems like you can’t switch on the TV these days without being confronted by a dozen or more different detectives, all vying for your attention. Home grown series like Broadchurch or Silent Witness; slick US shows like Bones and True Detective; and the newcomers - at least to these shores - the Scandinavians and Europeans with their bleak vistas and even bleaker characters. What is it about these shows that is so popular? Why do we keep coming back to them?
Confession time: while I’ve written eleven novels featuring Detective Inspector Tony McLean and three featuring Detective Constable Constance Fairchild, I haven’t watched a great deal of crime drama on TV in recent times. In my defence, I’d add that I haven’t watched a great deal of anything at all on TV in the past decade. I run a livestock farm pretty much single-handedly. That takes up most of my time during the day. In the evenings I write. Somewhere I manage to find some time to read, although not as much as I’d like to. Telly comes a distant fourth.

The last crime drama I can remember watching (at least the first series, I’ve got a little catching up to do!) was BBC Wales’ excellent Hinterland – otherwise known as Y Gwyll, or The Dusk in Welsh. Mostly I was drawn in by the fact it was filmed in and around Aberystwyth, where I’d lived for ten years before returning to Scotland to take on the family farm. Some of the series was filmed on the research farm where I used to work – you can see the house where I wrote the first two Inspector McLean novels in episode two, next door to where the murderer lives! A few of the locals turn up as extras too, which is equal parts distracting and hilarious.

More fascinating is seeing how the show is structured visually. Actual geography very much takes second place to getting the best, most atmospheric shot whenever possible. Many’s the time the detectives drive out of Aberystwyth and then arrive at their destination from completely the wrong direction. Or there’s an aerial shot of a car dodging sheep as it speeds across the mountain road towards Rhayader, and the next thing they’re arriving in Borth – exactly the other way.

Setting is always important to any story, but with crime fiction it is often crucial. Edinburgh is an essential backdrop to the Inspector McLean stories, verging as they do on the edges of the supernatural. The city becomes one of the characters, dark and mysterious and layered both by age and architecture. Television being a visual medium brings that reliance on setting all the more to the fore.

The setting for Hinterland – the moorland of the Cambrian Mountains and the Cardigan Bay coast of Wales - is an area of great beauty, wide open vistas and very few people. At its centre, Aberystwyth is quite literally the end of the line – the furthest you can go into Wales on a train before you fall into the sea. It’s a prosperous enough place, with the University, Bronglais Hospital and the Welsh Assembly Government offices the main employers, but like many a seaside town it’s also the metaphorical end of the line, where successive waves of incomers have ended up and not done so well. There is desperation, poverty, the misery of drug abuse and people who have simply reached breaking point. There’s a tension, too, between the Welsh-speaking locals and the incomers, many of whom have spread further afield into the small villages dotted inland and along the coast. All in all a perfect melting pot for studying the worst of the human condition.

But what really makes Hinterland for me, beyond the sense of hiraeth I get from its wonderfully bleak and evocative setting, is its use of the Welsh language. The series was recorded in both Welsh language and English versions, and the Welsh, suitably subtitled, was initially more popular than the English. That sense of foreignness – otherness – cranks up the tension another notch, tapping into the same exotic and sinister vein as the most successful Scandinavian and European crime noir shows, like Trapped and Spiral. It is at once familiar and unsettlingly different, the normal routines of life interrupted by something unspeakable.

And is that not, after all, what we look for in our crime fiction, both written and viewed? Crime affects us all, one way or another, and seeing it through the lens of fiction gives us that distance necessary to process and deal with it. The enduring appeal of crime series on the TV comes from the way we can immerse ourselves in other worlds, experience the vicarious thrill, revulsion and horror, empathise with the victims or even root for the underdog villains, all from the warm safety of our living room and favourite armchair.

What Will Burn by James Oswald (Headline Publishing)
The charred remains of an elderly woman are discovered in a burned-out game-keepers cottage, hidden away in woodland to the west of Edinburgh. Clearly no accidental fire, Detective Inspector Tony McLean suspects that neither is this simply a grim arson attack. There is far more to the victim than her humble surroundings might suggest, and something ritualistic to her horrific murder.  Nor will it be the only case of death by fire that Tony and his team will be faced with. This is only the beginning, and with such evil clouding the air, Tony begins to wonder what else will burn.
Posted by Ayo Onatade at 06:00