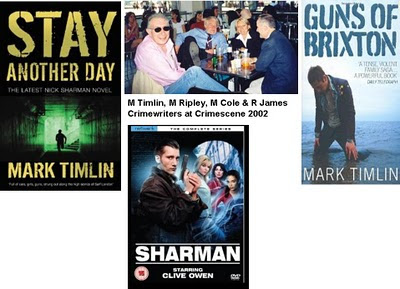 A few years ago, Mike Stotter and I sat in bar drinking with one of Britain’s most under-rated crime writers – Mark Timlin. Over our usual talk about what books hit the spot, because Timlin is also a keen and perceptive book reviewer; he said menacingly over his beer “I don’t know how you guys get time to manage a blog at Shots. I’ll start a blog when hell freezes over”. We’re delighted to announce that Mark Timlin was spotted buying Thermal underwear because the creator of Nick Sharman has started a blog!

Incidentally, Mark’s latest novel is Guns of Brixton and there is finally a Nick Sharman novel due out soon - Stay Another Day which is a remarkable return for the South London PI -

For seven years, ex-cop Nick Sharman has lived in 'exile' on a Caribbean island with no UK extradition treaty - his life of luxury funded by the proceeds of a bank robbery where he was the last man standing. Then a phone call out of the blue from London changes everything. The voice from the past belongs to the only woman that he loves, his daughter Judith. Like father, like daughter, she's a police officer, but the family resemblance doesn't stop there - Judith is in big trouble with the law, and has no one to turn to except her father.

Returning under an assumed name to a bleak mid-winter England, Nick finds things have changed, and so has he. He´s grown older, but perhaps no wiser and finds his once beloved London moving too fast for him. Vowing to clear his daughter's name by any means necessary, Sharman finds himself enmeshed with blackmailers, murderers, the security services, and Russian gangsters all baying for his blood - until he, Judith, and his old sparring partner Jack Robber, take on all-comers in a dramatic finale on the mean streets of the capital.
Posted by Ali Karim at 19:37